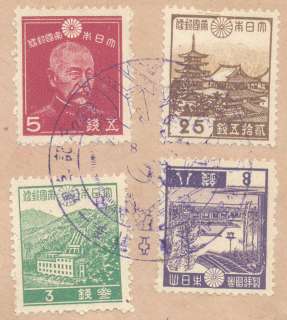 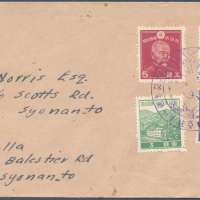 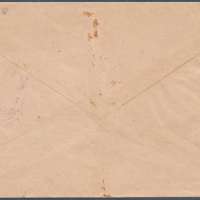 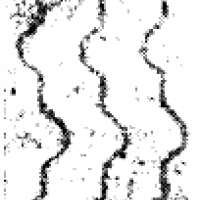 This is a postal cover used during Japanese Occupation in Malaya. It uses Japanese stamps that were authorised for usage in Malaya. On 8 December 1942, on the first anniversary of the start of the Pacific war, and five months before the pictorial definitives started being issued, the Japanese authorities issued four Japanese stamps in Malaya, for use there.

The commemorative cancellation dated 12 - 8 - 2602 in Japanese calender (December 8th, 1942) to celebrate First Anniversary of the start of the Greater East Asia War when the Japanese troop first landed at Kota Bharu, Kelantan just after midnight of December 8th, 1941 (The Battle of Kota Bharu).

Syonan-to was Japanese name for Singapore, it means Light of the South.

4 stamps were used with 4 different denominations.
1 of the stamps were fixed inverted on the envelope.

All four have same watermark.

The inscriptions on the stamps read right to left. Reversed, modern-style and with modern, simplified characters:


'syo nan' was spotted in the ring on top of 8 sen stamp.

The commemorative cancellation is believed to be a generic type and was probably prepared in Japan for use in post offices throughout Malaya for the anniversary mentioned.
Another possibility was the cover could have been a post-war manipulation. This is based on the observation that letters and postcards during this time should have had censored markings. IF IT IS GENUINE, it may have been cancelled-to-order and not have been mailed.
According to a source, the addresses are still used today; where 6 Scotts Road today is a newly built Scotts Square Shopping Centre and 529 Balestier Road remains as shop. The distance between these two places is less than 5km apart.

As normal letter rate during this time was 8 cents, the absence of a registration label and the excess postage applied, suggest the cover may have been a philatelic item.