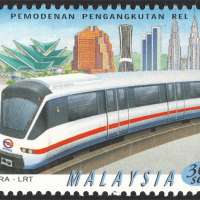 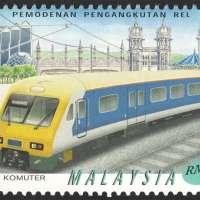 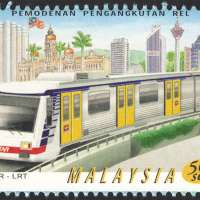 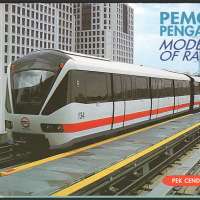 1995 marked a historic milestone when the first electric train the KTM Komuter service was successfully launched. This ushered in an era of electric trains that are safe, comes with speed, punctuality, and is environment friendly. The KTM Komuer provides a rapid, comfortable and value for money service to the people in the Klang Valley with the ultimate aim of reducing traffic congestion.

The KTM Komuter was opened on a sector basis. The commercial launch of the Kuala Lumpur - Rawang sector was on August 14, 1995 and by 18 December 1995, all sectors in the Klang Valley comprising 22 stations and 17 halts were fully operational. Currently KTM Komuter is running between 15 to 30 minutes frequency carrying an average of 1.7 million passengers a month.

The STAR-LRT system was completed in 1996. It is 27 km in length and has 25 stations. The trains can achieve a top speed of 70 km per hour, with an average operating speed of 34 km per hour which includes station stops.

Operating 18 hours daily from 6.00 am to 12 midnight at a frequency of 3 to 5 minutes during peak periods and 8 to 15 minutes at other times, the Phase 1 system has a capacity to transport 16,000 passengers per hour, per direction. Phase 2 consists of two extensions. One 9.5 km extension is from Chan Sow Lin to Sri Petaling and a northern extension of 3 km which will only be completed in 1999 will be from Sultan Ismail to Sentul Timur.

PUTRA-LRT was incorporated on 24th October, 1994. It covers a total distance of 29 km linking the eastern and western suburbs of Kuala Lumpur's most affluent and heavily populated areas. The total alignment from Lembah Subang Depot to Terminal Putra in Gombak is divided into 2 sections. Section 1 is from Lembah Subang Depot to Pasar Seni station to Terminal PUTRA in Gombak.

The PUTRA-LRT operates with 35 two-car units travelling at an average of 40 km per hour. Its initial capacity of 10,000 passengers per hour per direction is expected to increase to 30,000 passengers. They are fully air-conditioned and provide a service level of 90 seconds during peak hours and between 5 to 10 minues during off peak hours. Services are from 6.00 am until 12.00 midnight daily. When fully completed in 1999, it will be the world's longest and fully automated driverless system.

By the year 2000 all three systems will form an integral part of the overall integrated urban transportation system in Kuala Lumpur.