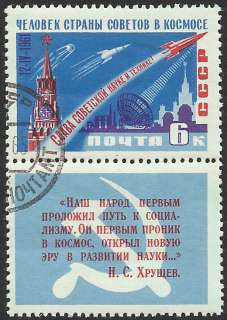 MAN OF THE COUNTRY OF BOARDS IN SPACE
12-IV-1961
GLORY OF SOVIET SCIENCE TECHNOLOGY!
MAIL 6K
USSR
« Our people first
pave the way for the social-
formalism. He first penetrated
in space, opened a new
the era of the development of science...  »
N.S. Khrushchev.

One way the Soviet Union tried to popularize major initiatives and programs was with government-issued stamps. Stamps reached nearly every person in every household and thereby served as a powerful means of advertising official programs and celebrating national achievements. This Soviet practice continued a tradition of the tsarist period, when Russian stamps featured projects in exploration and the personalities associated with them. In the first decades of the Soviet era, beginning in 1917, stamps often featured major development projects or prominent scientists and artists. At the dawn of the space age, the Ministry of Communications (which included telephone, telegraph, and the post) chose stamps with themes that honored Soviet activities in space.

This stamp celebrates the first flight of a human into space. On April 12, 1961, Yuri Gagarin made a single orbit of the Earth on board the Vostok spacecraft. The Soviets carefully managed public announcements of his flight, including issuance of the stamp in 1961. After Gagarin returned from space, he immediately began a goodwill tour that spread the word of his flight and Soviet successes throughout the world. His spacecraft and its capabilities, however, remained shrouded in mystery. After the flight, the Soviet government chose to reveal a few technical details, as part of its active publicizing and promotion of Gagarin's mission.

The illustration of the spacecraft on the stamp bore little resemblance to that of the Vostok capsule. Gagarin's spacecraft entered orbit as a cylinder with a cone on one end and returned to Earth as a sphere. The illustration on the stamp adheres to the imagery of spaceflight of the pre-Sputnik era. Titled, Man from the Land of the Soviets in Space, this stamp illustrates the message that the Soviet government crafted about the first human spaceflight. The cosmonaut looks outward and upward as the rocket lifts over the Kremlin, clearly demonstrating the political origins of his flight. The date of Gagarin's flight is written in the plumes. The highly stylized versions of the rocket and spacecraft resemble the popular image of a rocket ship from the 1930s, directly connecting popular images of spaceflight with Gagarin's successful Vostok mission.