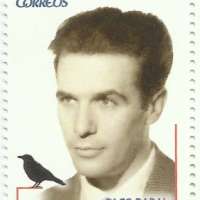 This year’s Spanish Cinema issue is made up of three stamps devoted to the “Best film” of the Goya Awards 2012 and to actors Fernando Rey and Francisco Rabal.

Francisco Rabal (Aguilas, Murcia, 1926 - Bordeaux, France, 2001) was one of the most sought after young performers in the 1950s. He was a theatre, film and TV actor who worked with the most innovative directors in Spanish cinema. Under Luis Buñuel he acted in Nazarin (1958), Viridiana (1961) and Belle de Jour (1966). Juan Antonio Bardem, Carlos Saura, J. L. Garcia Sanchez, Visconti and Antonioni were other directors with whom he worked. In the early 1980's his career took a turn with more charismatic roles in La Colmena and Los Santos Inocentes (1984) by Mario Camus, with whom he won the award for Best Actor at Cannes. For his part in Goya en Burdeos (1999) he obtained this award for the second time. In TV he starred in series such as Los Desastres de la Guerra, Cervantes and Juncal. He had a deep characteristic voice and his fame was internationally acknowledged.