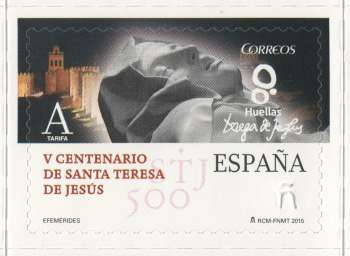 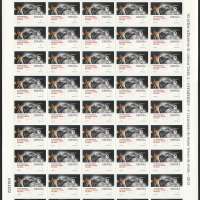 To commemorate the 5th Centenary of the Birth of St. Teresa of Ávila, tracing the story of the founder of the Discalced Carmelites, we are issuing a self-adhesive stamp showing a detail of the sculpture The Ecstasy of St. Teresa, by Gian Lorenzo Bernini. Part of the issue is presented in a limited edition Premium Sheet, with a stanza of the poem "Vivo sin vivir en mí".

Teresa de Cepeda y Ahumada (Ávila, 1515 – Alba de Tormes, 1582), known as Saint Teresa de Jesús or de Ávila, was the daughter of Alfonso Sánchez de Cepeda and Beatriz de Ahumada, both from noble Castilian families. As a child, she was very fond of reading books about chivalry and the lives of the saints, which were popular in that period. In 1531 her father sent her to school at the Augustine convent of Santa María de Gracia, where the daughters of the nobility were educated, which she had to leave after a serious illness.

Gradually, her religious vocation took shape, and in 1535 she chose to enter the convent of the Carmelites of the Incarnation, where she took her vows in 1537. She again became ill and returned to her parents' house for medical care. She would be affected by illness for the rest of her life. Back at the convent, she went through a period of mental problems and internal struggles, until in 1554 she began to have hallucinations which would lead her to devote herself to religion and to undertake reforms of the Carmelite order, to return it to its former monastic rigour.

Later she began a period of intense activity devoted to prayer, founding new convents and working to further the cause of reform. From 1567 until her death, she founded convents in Medina del Campo, Malagón, Valladolid, Toledo, Pastrana, Salamanca, Alba de Tormes, Segovia, Beas, Seville, Caravaca, Villanueva de la Jara, Palencia, Soria and Burgos. Meanwhile, she attempted the religious reform of the Carmelite monks, working with Saint John of the Cross.

She recorded her life and spiritual development in works such as La Vida, Las Fundaciones, Las Moradas and Castillo Interior. Teresa of Ávila was beatified in 1614 and canonised in 1622. In 1970 she was proclaimed a Doctor of the Church by Pope Paul VI, one of the only four female Doctors of the Church.
COMMENTS
NEW COMMENT