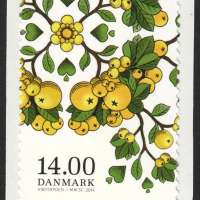 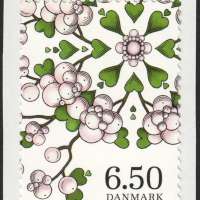 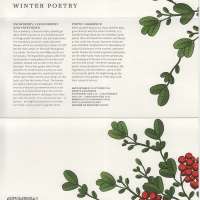 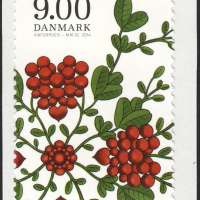 GENERAL INFORMATION
Country
Denmark
Type
Presentation Pack
Class
Special Issue
Issued Date
13/10/2014
Designer
Ditte Rosenørn Holm
Printing Method
Offset
Gum
Self-Adhesive
Dimension
36.6 × 26.5 mm
IN COLLECTION CONDITION
Preliminary
Normal
Condition
Mint Never Hinged - Extra Fine
Denmark - Winter Stamps 2014 : 'Winter Poetry' [Display Pack]
When autumn draws to a close, and the days grow shorter with the onset of winter, it is wonderful that there are still some plants that withstand the weather and flower at this cold time of year. That said, there are only a handful compared to the abundance of colourful blossoms in the summer, and most winter flowers are found in gardens and parks. On the other hand, many bushes and shrubs are dripping with berries in the autumn and well into the winter.

Through popular demand, Post Danmark is issuing three stamps with motifs of winter berries. The three stamps are poetic inter- pretations of the snowberry, the lingonberry and the firethorn, some of the most popular plants for brightening up the garden on chilly days with their colourful fruit.

The snowberry is found in many Danish gardens where it grows as an ornamental bush or hedge plant. Between July and September, the snowberry produces small, pale pink flowers which are replaced by clusters of soft berries that remain on the bush throughout the winter. The berries are mildly poisonous to humans.

The lingonberry grows wild in the country- side in many places in northern and western Jutland, but is rarer in the rest of Denmark. This winter-green dwarf shrub presents its small flowers as early as June. The flowers develop into round red berries which ripen in late summer and remain on the bush until the first winter frost. The berries are used in particular to make jam.

The firethorn is a beautiful ornamental shrub, both during its profuse flowering in the summer and afterwards when it develops fruit lasting well into winter. The colourful berries – or pomes – are slightly poisonous to humans, but make a tasty snack for garden birds.