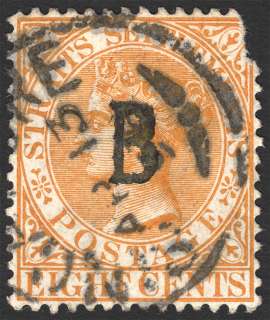 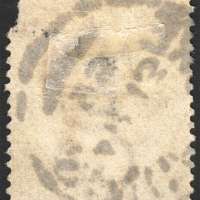 The postmark is assumed as 13 April 1896, best guest for the year which somehow was after it was no longer in use.

The signing of the Bowring Treaty on 18 April 1855 opened Siam to foreign trade and diplomatic relations were established with Britain. The British Consulate located on the banks of the Chao Phraya River in Bangkok was established on 11 June 1856. Since there was no postal service in Siam, merchants, missionaries and other foreign residents of Bangkok requested permission to include their letters in the diplomatic pouch that traveled back and forth to Singapore every 15 days. Thus most such mail has a Singapore cancel.

The demand for this service grew to the point that the duties of "Honorary Post Master" eventually fell upon Mr. H. A. Gardner the Chief Constable at the Consulate in January 1869.

Originally definitive stamps issued by the Straits Settlements Colonies were used, cancelled with the Embassy handstamp.

When Gardner complained in 1881 that he should be compensated for the increasing amount of work that was required of him it was agreed that a portion of the revenue for stamp sales would be retained.

This led to the overprinting during 1882 of Straits Settlement with the letter B, representing Bangkok, for use there. The first shipment of B-overprinted Straits Settlements stamps, specifically for use in Bangkok, arrived in May 1882. However, stamps of the Straits Settlements, Hong Kong and Great Britain are known used on mail that went through this branch post office prior and after this date. The 1882 issue consisted of eight denominations from 2 cents to 12 cents.

A stock of obsolete Straits Settlements stamps were on hand — the 32 cents overprint on 2 annas yellow dating from 1867.  These were given an additional overprint, a large letter B for Bangkok, and appeared in the British Post Office on 1 September 1882. In all, twenty-two Straits Settlements B overprinted-stamps were issued and remained in use

During this period, Bangkok’s 30mm diameter circular date stamp was also introduced to postmark the stamps on the outgoing mail. Letters, cards and newspapers bound for Europe were still sent to enter the postal system at Singapore while mail destined for China, Japan or the United States were forwarded through Hong Kong. Inbound mails from steamboats were kept at the post office for people to come and pick up.

After nearly 30 years of service, the British Consular Post Office in Bangkok closed on 30 June 1885 as Siam joined the UPU on 1 July 1885 and assumed responsibility for all domestic and international mails.

After the closure of the post office in July 1885, the B overprinted stamps were seen used elsewhere. An example is a cover sent from Singapore in December 1887 bearing postage stamps from Straits Settlements both with and without the overprint.

Occasionally, examples of inverted ‘B’s have been found together with even rarer double overprints with a shadow ‘B’ in the background. Forgeries of the overprinted "B" stamps are very common.
COMMENTS
NEW COMMENT