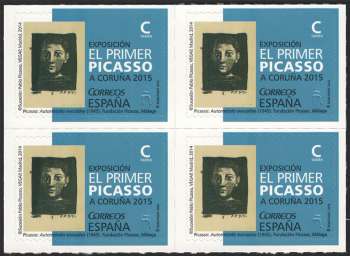 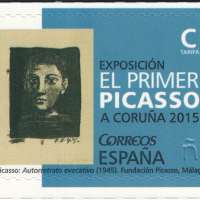 This is an increase by €0.10 from the year before.

The exhibition El Primer Picasso. A Coruña 2015 (The First Picasso) provides the subject for the self-adhesive stamp commemorating the period when the painter lived in the city of A Coruña, where he began his artistic training and showed his first work in 1895.

The least-known stage of the life and artistic development of Pablo Ruiz Picasso (Málaga, 1881-Mougins, 1973) is without a doubt the time he spent in A Coruña. He arrived in 1891, when his father José Ruiz Blasco, an art teacher, moved with his family to the Galician city to teach drawing at A Guarda secondary school. From 1891 to 1895, Picasso studied at the school and began to draw under the guidance of his father. At this period he drew the working-class people he saw in the street and in the harbour. The landscapes of A Coruña, the sea, the townspeople and the fishermen were his main source of inspiration.

As Picasso's technique improved, his father encouraged him to try oil painting, and the young painter created his first canvases with portraits of his friends and family. The most notable works of his time in A Coruña include: The Barefoot Girl, a masterpiece of his A Coruña period; Old Couple; The Old Man with the Blanket and the Portrait of Doctor Pérez Costales, a doctor and politician who was a friend of his father's. A Coruña represented an important stage in the life of Pablo Picasso; he began his artistic training there, painted his first notable works and presented the first exhibition of his long career.

Barcelona, Madrid and Paris would be the next destinations of the great Spanish artist, who with Georges Braque originated one of the most important and revolutionary avant-garde movements of 20th century painting: Cubism.

In 1936, the Republican government appointed Pablo Picasso as the director of the Prado, and a year later, after the bombing of Guernica, he painted his most famous work of the same name. The painting symbolises a protest against barbarity and everything implied in the "disintegration of a world immersed in the horrors of war".

Picasso's art has been the subject of many stamp issues since 1978. This stamp reproduces his lithograph Evocative Self-portrait, from the Picasso Foundation museum in Malaga. Dated 1945, when the painter was 64, it depicts a young boy, evoking his own youth.