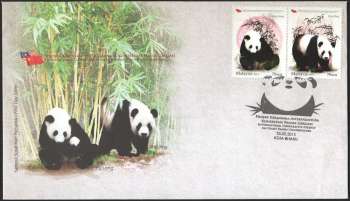 KUALA LUMPUR, Monday – Stamp lovers are notified to brace for panda-mania of global proportions for the latest issue of stamps to mark the presence of Xing Xing and Liang Liang in Malaysia.

A hit among visitors at the Zoo Negara Malaysia, the two adorable pandas loaned from China to symbolize strong relations between Malaysia and China will now be featured on a special stamp collection which will be available for sale at all post offices nationwide startingWednesday, February 25th, 2015.

“Going by past experience, we expect this special issue to also be snapped up fast. Hence, we urge members of the public, especially stamp and panda lovers, not to miss this opportunity to own a piece of the panda collection. These stamps may be purchased online atwww.posonline.com.my via SODA (Standing Order Deposit Account). Registering with SODA allows anyone to receive these stamps on the day of issue without having to queue at the post office. This site also allows customers to be notified of new issues,” he added.

The highlight of this special issue will be the miniature sheet with special printing using flocked paper with security fibers priced at RM8 each.

The miniature sheet measuring 80mm x 90mm will feature both the male panda Xing Xing which means Prosperity and the female panda Liang Liang or Pretty with stamps measuring 28mm x 45mm each.

Apart from the miniature sheet, two 28mm x 45mm regular-sized stamps featuring the two pandas are available at 70 sen each. The stamps are printed on yellow green phosphor stamp paper.

In June last year, Pos Malaysia released a special commemorative cover to honor the 40th Anniversary of warm diplomatic ties between Malaysia and China featuring two stamps with a picture of Putra Perdana, Putrajaya and the Great Hall of the People in Beijing and the image of Prime Minister Datuk Seri Najib Tun Razak and President Xi Jinping of China shaking hands as well as the coat of arms of Malaysia and China.

For the record, this is the fourth stamp and philatelic collection issued by Pos Malaysia this year. The recent special issue was on Farm Animals-theme collection that featured the wooden goat to celebrate the Year of the Goat in Chinese Lunar calendar.