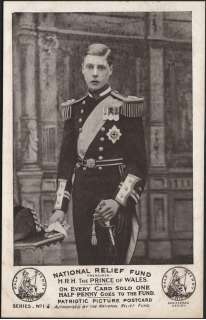 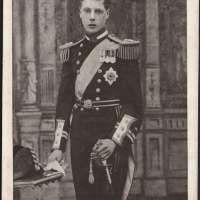 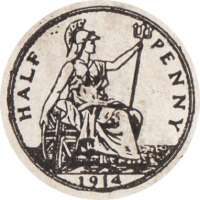 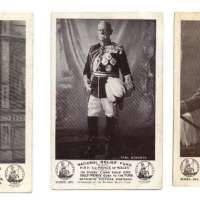 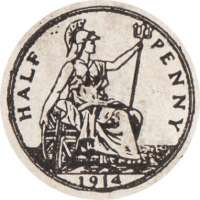 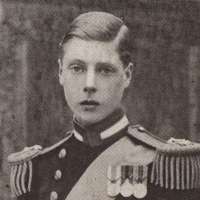 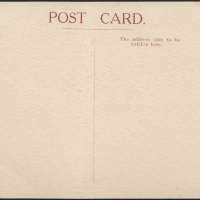 It was part of the first official National Relief Fund postcard from series 1 of the ‘authorised postcard’ series. It featured the Fund’s treasurer, H.R.H. the Prince of Wales. The prince was eager to get into khaki as soon as possible and although eventually he did, he was never allowed anywhere near the battlefronts.

"There was terrible confusion..."  Sylvia Pankhurst.

"Buckingham Palace - all must realise that the present time of deep anxiety will be followed by one of considerable distress among the people of this country least able to bear it. We must earnestly pray that their suffering may be neither long nor bitter, but we cannot wait until the need presses heavily upon us. The means of relief must be ready in our hands. To ally anxiety will go some way to stay distress. A National Fund has been founded, and I am proud to act as its Treasurer. My first duty is to ask for generous and ready support, and I know that I shall not ask in vain. At such a moment we all stand by one another, and it is to the heart of the British people that I confidently make this earnest appeal. Edward."

Why did the Prince make this extraordinary appeal? The answer lies in the momentous events of three days earlier. On 4th August, Germany had invaded Belgium. Britain, treaty bound, declared war on the aggressor. The army was mobilised and the British Expeditionary Force (B.E.F.) was assembled. With a war strength of well below the required 160,000 men, army reservists were called back to the ‘colours’. The speed with which this was carried out (sometimes at one hour's notice) caught thousands of families unaware and often caused massive difficulties for dependents. Sylvia Pankhurst, working among the poor in London’s East End, recalled; "There was terrible confusion, masses of women did not know how or where to apply for their [separation] allowances, and waited long and vainly for them to come through automatically."

The desperation and uncertainty of the reservists spread to other sections of the civil population as those involved in the manufacture and sale of goods to Germany lost their jobs almost overnight, many mill-workers were put on short-time working and several East Coast fishing ports were thrown into chaos. Mrs. Pankhurst was to later write,

"The purchasing power of large sections of the people had dwindled to zero; to be work-less then meant literal starvation. The small unemployment benefit obtainable under the national insurance applied only to a few trades. It was an axion of then poor law practice that relief, save the shelter of the workhouse, must not be granted to the “able-bodied” and their dependents...Even had poor law procedure allowed it, the guardians had not the funds to cope with this great wave of unemployment."

On 6th August Will Crooks, Labour M.P. for Woolwich, asked in the House of Commons; "I desire to ask the Prime Minister...as to what provision is being made for the Reserve men’s wives and children, both navy and army."  Mr. Asquith replied simply; "a full consideration will be given to it." However, it seems that no extra government funds to help the distressed were forthcoming. Instead, the burden would fall upon the public via the Prince of Wales appeal. Fortunately, the Prince’s confidence in the public proved to be fully justified. By midnight the Palace had received £250,000. On 8th August The Times further reported all the money would be used in the best way; "both for the distress arising from the war among the families of soldiers and sailors...as well as from industrial distress."

Before August 1914 was over, the first series of official fund-raising postcards was released under the direction of Joseph Clarkson. They were advertised as "the only authorised postcard in aid of [the] National Relief Fund." Produced in a black and white format, the cards feature single portraits of royalty, military and naval leaders and statesmen. The cards were not numbered but there were probably twelve in the series. Personalities included: Earl Kitchener, Sir Edward Grey, Lieut. Col. E. Martineau, Gen. Joffre, H.R.H. Prince Albert, H.M. Queen Mary, Admiral Sir J. Jellicoe, H.M. King George V, H. M. King Albert of Belgium, H.R.H. Princess Mary, Field Marshall Sir John French, and H.R.H. The Prince of Wales.