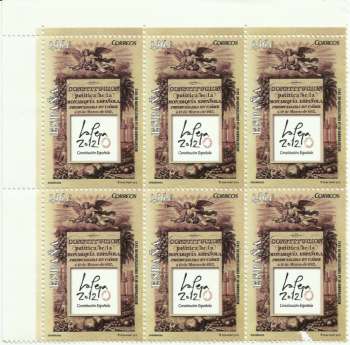 Coinciding with the bicentennial of the 1812 Constitution a commemorative stamp is issued depicting the cover of a deluxe edition engraved by José María de Santiago and dedicated to the Cortes (Legislative assembly). This edition was published in 1822 during the liberal period and the whole text is framed with an architectural border. The beginning of each title is decorated with a character referring to its contents.

The Constitution of 1812 is made up of ten titles and 384 articles and is one of the most important liberal legal texts in history. It was adopted by the Cortes of Cádiz on March 19 1812, festivity of Saint Joseph hence its nickname "La Pepa". Many of its basic principles remain valid today and at the time of its proclamation it was a step forward and a break with the Old Regime.

The main principles are: national sovereignty, the separation of the legislative, executive and judiciary powers, the right of representation, the recognition of individual rights such as freedom of speech, press and publications, the inviolability of the home, personal freedom and the right to property. It provided for a limited constitutional monarchy and established the equality of citizens before the law. It also ruled Roman Catholicism as the state religion and established indirect universal male suffrage for those over 25, who elected the delegates who in turn elected deputies.

The Constitution was in force for limited periods of time (from 1812 to 1814, from 1820 to 1823 during the liberal triennium and in the period from 1836 to 1837) and suffered the political vicissitudes of the first third of the nineteenth century. It had, nonetheless, a transcendent meaning in the history of Spain and laid the foundation for subsequent constitutions. It was sworn in the territories of the American colonies and served as a constitutional model for many of the republics that became independent between 1820 and 1830. The influence of the 1812 Constitution on the emerging states of Latin America was quite direct since significant figures in founding American republics, were active participants at Cádiz. It was translated into English, French, German, Portuguese and Italian as one of the most notorious legal and democratic texts of the time.