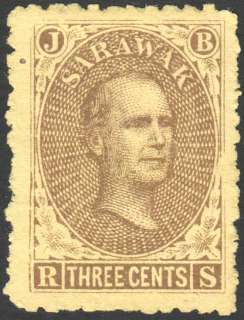 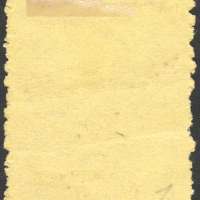 This stamp was told to be engraved by Mr Charles Whiting, but a cursory examination of even a few stamps how that it was produced by a lithographic process. A die was first engraved, and from this sufficient transfers were taken to complete a lithographic stone for printing 100 stamps.

The design, consists of a three-quarter face portrait of Sir James Brooke, with head to right on an oval with an engine-turned background. Curved around the top of the head in the same oval is SARAWAK in uncoloured capital letters. At the corners fancy scrollwork is introduced and in the top ones the letters J and B appear at the left and right respectively in small circles. At the base the value THREE CENTS is shown in incoloured letters on a rectangular tablet, and in squares on each side of this are the letters R to the left and S to the right. These letters of course stand for James Brooke, Rajah of Sarawak. The whole is enclosed in a single line upright rectangular frame measuring 18¾ mm by 26½ mm.

The stamps were printed in sheets of 100, arranged in 10 rows of 10, printed in brown on fairly thick, unwatermarked, wove, yellow paper. The perforation which gauges 11, was made by single-line machine of which apparently two were in use. They may be differentiated as follows:

Specimens are in known in imperforate condition.