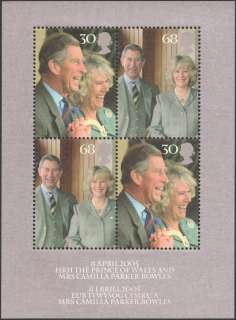 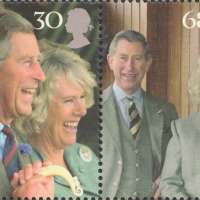 Following the decision that HRH the Prince of Wales would represent the Queen at the Friday funeral of Pope John Paul II in Rome, Royal Mail announced it postponed the issue of its Royal Wedding stamps for 24 hours until Saturday 9 April.

The sheet contains two copies of each stamp in a silver background with white lettering. The 30p, by Christopher Furlong, shows the couple at the Mey Games in Scotland in August 2004; the picture on the 68p stamp was taken at Birkhall, the Prince's Scottish residence in January 2005 by Carolyn Robb. The caption on the sheet is in English and Welsh.

The stamps are printed in litho by Enschede of Holland, with all over phosphor.