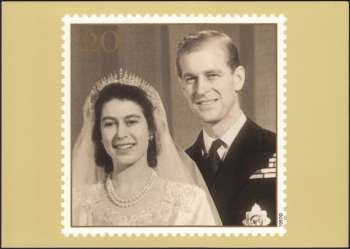 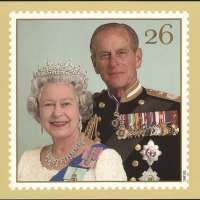 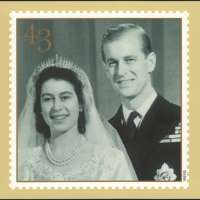 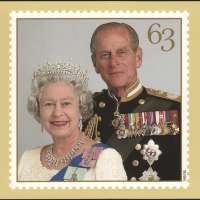 Elizabeth met her future husband, Prince Philip of Greece and Denmark, in 1934 and 1937. They are second cousins once removed through King Christian IX of Denmark and third cousins through Queen Victoria. After another meeting at the Royal Naval College in Dartmouth in July 1939, Elizabeth—though only 13 years old—said she fell in love with Philip and they began to exchange letters. Their engagement was officially announced on 9 July 1947.

Before the marriage, Philip renounced his Greek and Danish titles, converted from Greek Orthodoxy to Anglicanism, and adopted the style Lieutenant Philip Mountbatten, taking the surname of his mother's British family. Just before the wedding, he was created Duke of Edinburgh and granted the style His Royal Highness.

Elizabeth and Philip were married on 20 November 1947 at Westminster Abbey. They received 2500 wedding gifts from around the world. Because Britain had not yet completely recovered from the devastation of the war, Elizabeth requiredration coupons to buy the material for her gown, which was designed by Norman Hartnell. In post-war Britain, it was not acceptable for the Duke of Edinburgh's German relations, including his three surviving sisters, to be invited to the wedding. The Duke of Windsor, formerly King Edward VIII, was not invited either.