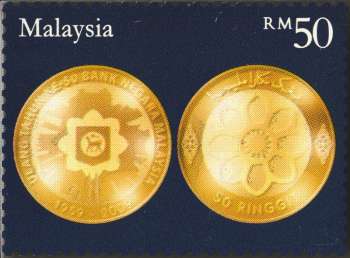 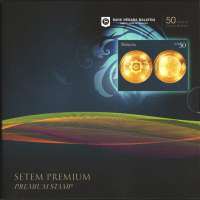 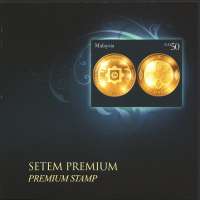 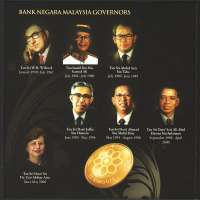 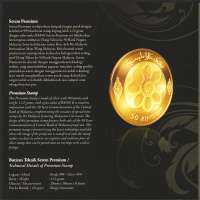 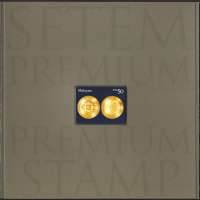 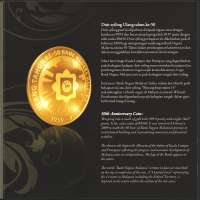 The Premium Stamp is issued in conjunction with the 50 years commemorative of the Central Bank of Malaysia, complementing the issuance of special issue stamps by Pos Malaysia featuring Malaysian currencies.

The stamp is mounted in a protective plastic contain within a Stamp Card Folder with a special protective cover. The metal stamp has no gum/adhesive pre-applied on the reverse.

One side of the card, showing photos of the past and present governors of the BNM.

The stamp was issued by BNM and sold by POS Malaysia. It is valid for postage.

Pos Malaysia’s head of stamps and philately, Yasmin Ramli said besides using the visual of the Bank Negara’s 50th anniversary coin, the uniqueness of the stamp was in the material used in the printing which was 99.9 per cent silver-based.

“The exclusive stamp is printed in RM50 denomination and we only produce 5,000 pieces of the stamp,” she said  yesterday.

By producing the stamps, Pos Malaysia could indirectly expose to the public the types of coins minted and the role played by Bank Negara during the 50 years of its inception, she said.

“The bilateral cooperation is in recognition of the role played by Bank Negara especially in the country’s economic development and introducing to the public the first stamp to be printed using the silver metal foil printing technique,” she said.

Pos Malaysia is also issuing stamps carrying the 10-sen, 20-sen and 50-sen coins as visuals in denomination of 50 sen as well as first day covers in conjunction with the anniversary.

IT IS THIS ITEM SOLD ?