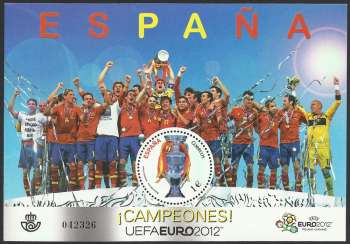 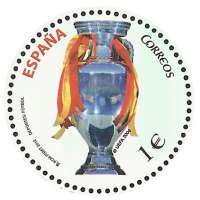 With a postal face value of 1 Euro and

On July 1st, 2012, the Spanish Football Team figured again in the history of sports when it won the European Football Championship 2012. With its victory, this national team became the first to achieve three consecutive international titles, breaking all existing records. As a tribute to the success achieved, Correos has put into circulation a commemorative souvenir sheet which reproduces a photograph of the whole football team, raising the trophy and exhibiting on their breasts the champions’ medal. In the round stamp appears the prized trophy.

Thus, this historical triumph is added to all those previously immortalized in the philatelic series Sports, whose purpose is that of giving recognition to Spanish sportsmen – in this case, to the Spanish Football Team – and to highlight and make known the values which they embody; competitiveness, perseverance, joint effort and team spirit, which are required for achieving high goals.

Sports with it's own stamp

CORREOS has already before reproduced other important milestones of Spanish sport, such as for instance, the victories achieved by the Spanish Basketball Team, the Spanish Tennis Team in the Davis Cup, participation in American Sailing Cup, or the above mentioned wins of the Spanish Football Team in the European Football Championship.

Also since 1960, as part of the philatelic series Sports, more than thirty stamps have been issued dedicated to football, commemorating the centenary of a number of teams, the World Football Cup “Spain ‘82”, as well as other significant events, such as the 25th anniversary of the Football King’s Cup, and FIFA’s centenary.

The Spanish Royal Football Federation resolved in 1920 to set up a football team in order to take part in Antwerp’s Summer Olympic Games, in Belgium. Since then, Spain’s Football Team has went through good and bad situations, full of victories and defeats. In 1964 it won for the first time the European Football Championship versus the Soviet Union, in the final match which took place in Santiago Bernabéu’s field in Madrid. Its annals record its participation in 13 series of the World Football Cup, 9 European Football Championships, 3 Olympic Games, and 1 FIFA Confederations Cup.

In 2010, the Spanish Football Team was awarded the Premio Príncipe de Asturias for the Sports, in recognition to its merits in sport.

The postal stamp dedicated to commemorate the new win of the Spanish Football Team has a format of a souvenir sheet with a 150 x 104.5 mm size, a 280,000 print, and a face value of 1 Euro. It is an offset printing, in coated, gummed, and phosphorescent paper. The stamp is 32 mm sized (circular). The philatelic issue is already on sale in the network of more than 2,300 multiservice post offices all over Spain and in other postage points of sale. On the background of the souvenir sheet is reproduced an image of all the players of the Spanish Football Team celebrating their victory in the UEFA’s European Football Championship 2012, together with the Championship’s logo and Correos’ logo. On the round postal stamp, UEFA’s official trophy and ribbons with the colors of Spain’s national flag.