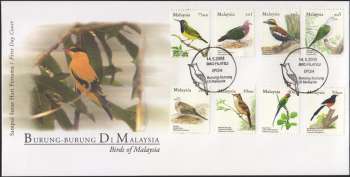 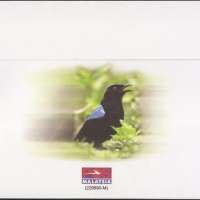 This set is particular pricey despite being its definitive nature and commonly found. I have asked around and I got these answers to speculate why:

1. Topical interest, high worldwide demand from avid bird-themed stamp collectors.
2. Hoarding. Malaysian collectors have a tendency to hoard anything that is in demand.
3. These are technically definitives where 20 sen, 30 sen, 50 sen, RM1 and RM5 can be easily found BUT 40 sen, 75 sen, RM2 were never reprinted (making them scarce considering they are definitives) due to various issues of communication between the stamp supply department and philatelic department.
4. The first print of these stamps can be easily identified by their inverted SPM watermark - adding interest to their collectibility.

The initial print were printed in a philatelic "sheet" (sheet of 20 rather than 100) and the printing quantity is the same as any commemorative stamp issue. Only when the initial prints are exhausted, sheets of 100 appear at the counters.

SPM is the abbreviation of Security Printer of Malaysia.

These are large plump pigeons between 42 cm and 47 cm. Their back, wings and tail are iridescent red-almond. They have dull grey-grape crown, neck and underparts, dark almond undertail coverts. They are mostly found near rivers, forages in small groups, feeding on plant material in the tree canopy and is recognised by its deep resonant call. They breed between the months of January and May, as well as September. Their nests are poorly constructed flat platform of twigs in a tree and sometimes on bamboo clumps about 10 metres from the ground. The female lays 1 or 2 white eggs measuring 45.5 × 33.5 mm on average.