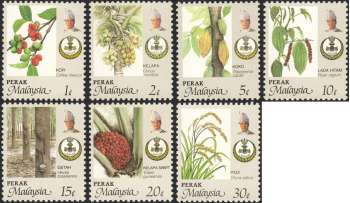 Malaysia is basically an agricultural country, well known as the world’s largest producer of rubber and palm oil. Together they occupy more than half of the country’s cultivated land and contributed a major share of the foreign exchange revenue. Beverages such as cocoa and coffee and spices such as pepper are grown successfully and also contribute significantly towards export earnings.

In terms of food production, rice is the major food crop.

Presently, rice the staple food in Malaysia is still being imported. Malaysia is striving to attain self-sufficiency in the production of rice. Other food crops of importance produced locally are coconuts and groundnuts which are good sources of oil. Tapioca and sweet potatoes are also cultivated for their starch. Malaysia continues to import large quantities of maize and soya bean for human consumption as well as for animal feed. There is still a need and room for crop diversification in the country.

The coffee is a lowland species which can be grown on a variety of soils from peat to clay and requires heavy rainfall and high temperature. The coffee shrub grows up to a height of 7 meters. It has large, dark green glossy leaves while the flowers are starlike, white in color and fragrant. Coffee fruits are oval in shape and streaked with red when ripe and turn black upon drying. Coffee starts bearing fruit in the third year.

The coconut is cultivated in the coastal sands of the tropics and requires a suitable temperature and a well-distributed rainfall. The coconut tree has a crown of leaves at its apex and grows up to a height of 30 meters. The coconut is usually ovoid in shape and is green, yellow or orange in color upon maturity. The varieties of coconut are classified on the basis of palm height, nut size, color and other endosperm features.

Cocoa is a tropical crop which grows best in clay and sandy loams. The cocoa tree grows up to a height of 8 meters. It has large, dark green leaves. The fruits, commonly called pods, each containing between 35 – 45 seeds, are borne on the main stem of the tree and its fan branches. The young cocoa pods are cream, green or red in color and turn to red or purple upon ripening.

Pepper is grown at low altitudes in hot wet tropical climates and requires a well-drained alluvial soil rich in humus. The pepper plant is a perennial woody climber with a ligneous stem which can grow up to a height of 10 meters. It has simple alternate leaves on both its climbing and fruiting branches. Its fruits are globose and the exocarp is green in color turning to red when ripe and black when dry.

The rubber tree grows well in a hot, humid climate with the temperature ranging from 22 degrees Celsius – 30 degrees Celsius. It grows to a height of about 25 meters under cultivation. The tree bears trifoliate leaves. Its fruits turn brown and woody at maturity. The woody trilobed capsules split open ripening releasing three large brown seeds. Latex which comes into production about 5 years after planting is obtained by tapping the bark of the tree.

Oil palm requires adequate light and sufficient rainfall evenly distributed throughout the year. The oil palm grows up to a height of 20 meters. Its trunk is formed after three years and its apex is in the form of an inverted cone. Its leaves are produced in a spiral succession from the main stem. The fruit branches are borne in the axil of the lower leaves. The fruits are spherical to ovoid in shape and vary in color from an orange to a dark red.

Rice is normally found in the tropics. The rice plant can grow up to a height of 150 cm and has erect green culms which are smooth, cylindrical and up to 50 cm long with solid nodes and hollow internodes. Its leaves are alternate in two ranks with a single leaf at each node. The rice grain varies in size depending upon the variety. It takes about 30 days for the rice to ripen.