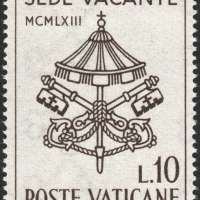 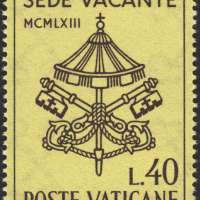 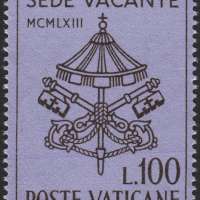 When a pope dies, there is a period during which no pope rules, known as the 'inter-regnum' - that is, the time between rulers. During the inter-regnum, the Seat of the Bishop of Rome at St. John Lateran is vacant, known as 'Sede Vacante.' With the death of Pope John XIII on June 4, 1963, there was an eleven-day interval between his death and the first day of issue of the Sede Vacante stamps at the Vatican Post Office, June 15th.

The Vatican issued three stamps in vertical format. At the top of the stamp appears SEDE VACANTE. Below this appears MCMLXIII (1963), the year of Pope John XXIII's death. In the center appears the symbolic canopy with the Crossed Keys, indicating that the cathedral throne of St. John Lateran stands vacant. In the bottom right corner appears the value, and along the bottom appears POSTE VATICANE.