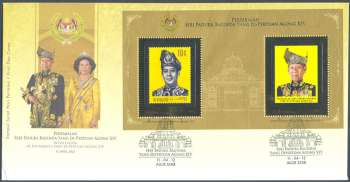 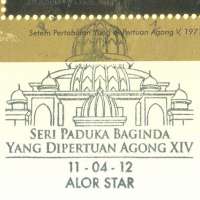 FDC with one miniature sheet (MS) and cancellation from Alor Setar.

Since 1993, the full title in Malay has been, Seri Paduka Baginda Yang di-Pertuan Agong (His Conqueror Majesty The Supreme Lord of the Federation) "Seri Penakluk Paduka Beliau Keagungan Diraja Baginda Yang di-Pertuan Agong" or (His Royal Conqueror Majesty The Supreme King of the Federation) . Prior to that, the honorific Ke Bawah Duli Yang Maha Mulia (The Dust Under The Feet of His Majesty) was also used. The consort of the Yang di-Pertuan Agong is called the Raja Permaisuri Agong (Queen Lady Consort). The couple are addressed in English as "His Majesty" and "Her Majesty".

The Yang di-Pertuan Agong is formally elected to a five-year term by and from among the nine Rulers of the Malay states (nine of the thirteen states of Malaysia that have hereditary royal rulers), who form the Conference of Rulers (Majlis Raja-raja). After a ruler had served as the Yang di-Pertuan Agong, he may not stand for election until all rulers of the other states have also stood for election.
COMMENTS
NEW COMMENT