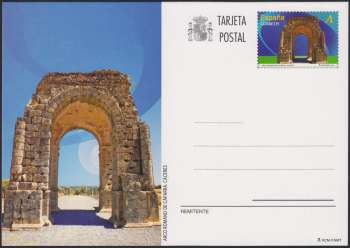 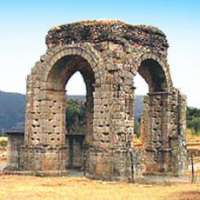 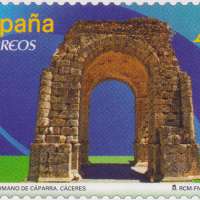 The Roman city of Cáparra is located in the ancient Roman province ofLusitania, in the locale of the Alagón in the nrth of Extremadura, within the Conventus Iuridicus Emeritensis, whose capital was Colonia Augusta Emerita. It was approached via the Roman road known as the Vía de la Plata and is now permanently abandoned. It is said to have been a pre-Roman city, although this remains unconfirmed and has been questioned by some authors, on the grounds that the flat location did not meet the defensive requirements of a pre-Roman town and only a few pottery remains have been found.

Placed at the Silver Way, this arch was the physical crossing between kardo maximus and decumanus of the Roman city of Capera. Its place was perfect for a function of commemoration and propaganda: the greatness and superiority of Rome. It was built at the end of 1st century at Flavia age. It is the only monumental arch with these features -quadrifons- found in Spain.

It is 8.60 x 7.30 meters at its plan and 12.50 meters high in its original construction. It is composed by four pillars placed at the corner of a square. They are joined by four semicircular archs. The solution found for the intersection with the two perpendicular barrel vaults shows the good experience of Roman architects and quarry men. It is a groin vault in wich voussoirs and lines do perfectly fit. Archs on façades are decorated with a little archivault on their exterior side.

Each pillar is supported by a basement crowned by a cornice. At the northern and southern sides four bases were built -two at each façade- with a rectangular plan. There should have been equestrian statues. On one of them can be read athe inscription:

Crown for the building - only inner concrete survives- should have been composed by an architrave, a frieze with cornice and a possible attic.