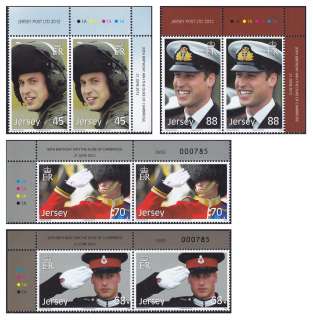 Prince William spent four months on secondment to the Royal Navy in 2008 and, during that time, was on a one month posting with the Frigate HMS Iron Duke. The ship was patrolling the warmer climes of the Caribbean when Sub-lieutenant Wales took part in a massive drugs capture. HMS Iron Duke was made 'Jersey's warship' in 2010 when she was officially affiliated to the island. She made her first visit to Jersey in November 2011. The Duke of Cambridge has been Commodore in Chief for Scotland and also Commodore in Chief for Submarines since 2006.

Prince William was appointed Colonel of the 1st Battalion Irish Guards, his first honorary appointment in the Army, by HM The Queen in February 2011. It is the first time that the position has been held by a member of the Royal Family. When The Duke of Cambridge married Miss Catherine Middleton on 29th April 2011, he chose to wear the striking red Irish Guards Officer's tunic as it was his highest ranking position.