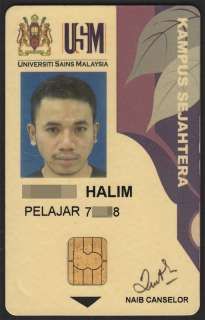 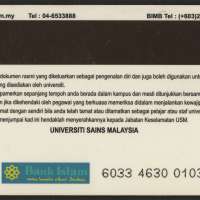 Universiti Sains Malaysia's student card (also known colloquially as Matrix Card) which was rolled out in 2004 with co-operation of Bank Islam Malaysia Berhad to provide banking facility for student.

During the introduction phase, photos were taken at the Examination Hall with plenty of booth provided to speed up the process. After a week, student may collect their card at the Chancellery building.

This card is connected to MEPS Bankcard network and also has NFC chip to allow holder to borrow book from the library.

This is in poor shape and showing discoloration because it was advised for student to wear it over their neck when in campus and compulsory when entering the library.

The Malaysian Electronic Payment System (MEPS) is an interbank network service provider in Malaysia. It is a payment consortium owned equally by 11 local banks and has a subsidiary company named MEPS Currency Management Sdn Bhd (MCM).

MEPS plays the integral role in the implementation of smart cards for automated teller machine (ATM) cards, which are an upgrade to chip-based cards from previous magnetic-stripe cards issued to all banks' customers.