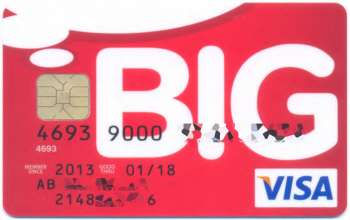 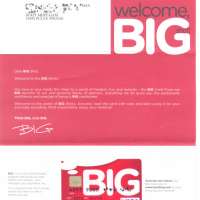 However, since the introduction of its own co-brand under Tune Money Sdn Bhd (which is in turn directly controlled by the majority owner of AirAsia), the processing fee is waived for payment using this prepaid card.

In order to apply, a person must have a BIG membership (which is AirAsia membership as well), which can be registered for free.

From then on, a customer who reside with a valid address in Malaysia can apply for the prepaid card and will be issued upon payment of RM10. The card was delivered through normal mail.

Introduced in early 2012, BIG Prepaid Visa has been discontinued on 15 December 2014 with all members were advised to switch to Mastercard issue.

AirAsia signed an agreement for a joint venture with financial services firm Tune Money to launch a programme called "BIG". Under this programme it will issue loyalty points to AirAsia customers and third-party merchants. Points can then be used to redeem AirAsia flights. Usage from the prepaid card will allow customer to collect points towards the frequent-flyer program.


FOR COLLECTION PURPOSE, THIS CARD HAS NOT BEEN REMOVED FROM ITS ORIGINAL LETTER AND NOT SIGNED. HOWEVER, IT WAS REPORTED MISSING AND NO LONGER ACTIVE.