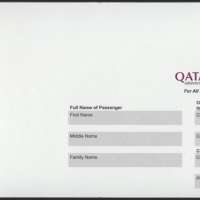 The carrier has been a member of the Oneworld alliance since October 2013, the first Gulf carrier to sign with one of the three airline alliances.