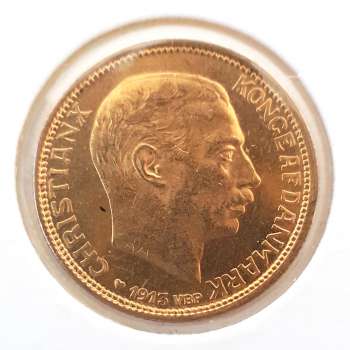 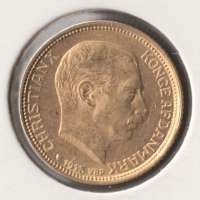 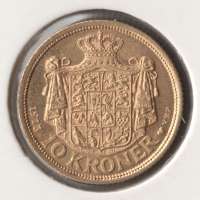 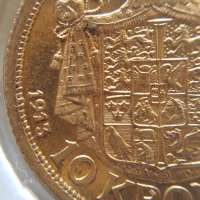 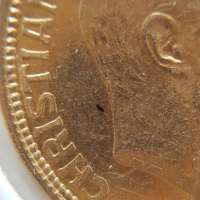 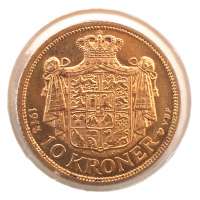 The Danish gold 10 kroner was issued for the first time in 1873 after the creation of what would become the world's most successful gold-based monetary agreement, the Scandinavian Monetary Union. Gold 10 crown is of great historical significance, as the coin was the foundation of this union, which inaugurated four decades of progress, stability and peace - an epoch embodied in these durable 21.6 karat gold coins.

Masterpiece was fully designed by the Royal Danish Monk, 10 crowns Christian X gold coins are decorated with the Danish coat of arms and gilded with a portrait of the king. He was depicted on the last version of the 10 kroner gold coin. The 10 crowns of gold coins carrying a portrait of King Christian X were the most issued gold coins under Denmark membership of the Scandinavian Monetary Union.

The Danish Gold 10 kroner one of Denmark's most famous gold coins.  The Danish gold coins issued in the years 1873-1914 are associated with a period in Denmark's history of peace, an increase in general wealth and, most importantly, four decades of stable prices. It is therefore no wonder that 10 kroner are the most sought after gold coins in Denmark.

Born in 1870 at Charlottenlund Castle near Copenhagen, Christian was the oldest son of Frederik VIII and grandchild of King Christian IX. After his father's death in 1912, he rose to the throne the same year as Christian X. Therefore he was the third and last Danish king to be depicted on 10 kroner gold coins.

King Christian X is probably the best remembered and one of the most beloved Danish monarchs throughout the ages. He became a symbol of opposition to Hitler's occupation, especially because he often rode through the streets of Denmark capital without the protection of his guards. Unlike his brother, King Haakon VII Norway, who went under exile during the Nazi occupation of his country, Christian X remained in Denmark throughout this period. His symbolic resistance was seen by many Danes as an act of courage and courage, which perhaps comprehensively foster mythical stories about him. One story tells that one day a German soldier asked a young boy why the king rode through the city without bodyguard. The boy said, "All of Denmark is his bodyguard".

The Scandinavian Monetary Union (Danish: Den skandinaviske møntunion, Swedish: Skandinaviska myntunionen, Norwegian: Den skandinaviske myntunion) was a monetary union formed by Denmark and the Swedish part of the Union between Sweden and Norway on 5 May 1873, by fixing their currencies against gold at par to each other and it was inspired by the Latin Monetary Union, established in 1865. After the dissolution of the Swedish-Norwegian union, in 1905, Norway continued to be a part of this monetary union. The union ended with the outbreak of World War I.

Although it is impossible to create a flawless monetary system, the Scandinavian Currency Union (SVU) was formed by Denmark and Sweden in 1873, and as Norway ended later in 1875, it was probably closest to perfect monetary harmony that had ever been conceived between different countries.

There were also standards for the coin diameter so that the coins had the same weight and size in all three countries. The union provided fixed exchange rates and stability in monetary terms, but the member countries continued to issue their own separate currencies. Although not initially foreseen, the perceived security led to a situation where the formally separate currencies were accepted on a basis of "as good as" the legal tender virtually throughout the entire area.

Up to 1873 there were a number of fundamental changes in the global economy; Silver, which for centuries had been the most important currency for global trade, gradually lost its status as money in favor of gold. The Latin Monetary Union, based on gold, was established in 1865 between several European countries. Germany, which was a major trading partner for the Nordic countries, changed to the gold standard in 1871 with the introduction of the gold field and England, which was also an important trading partner for both Denmark and Norway, had adopted the gold standard in the early 1800's. in the issue of gold sovereignty. Even the US was at a pseudo gold standard from the beginning of 1834. The reason that gold became the preferred currency choice was due to the higher value-to-weight ratio of yellow metal, that the cost of shipping and handling of gold was less than of silver. As the countries began to exchange their foreign exchange reserves by selling silver and buying gold, it obviously meant that silver compared to gold was becoming less worthwhile.

It was on this basis that the three Nordic countries whose monetary system was based on silver began to consider switching to the gold standard. In addition, the fact that the three Scandinavian countries had a different counting system, combined with different sizes of their metal composition, made the case even more complicated. For example, Sweden used silver rigsdaler, which was based on the decimal system, while Denmark with rigsdaler and Norway with species based their systems on fractions. These differences are due to additional exchange charges and were a burden for traders in view of the significant regional trade that was conducted between these three countries.

Denmark and Sweden decided in 1873 to set up the first Scandinavian monetary union based on the gold standard. The new system decided, "crown" in Danish and "crown" in Swedish ("crown" in English) was to become the new unit of account, which was divisible in 100 øre. The coins with denominations of 10 and 10 kroner were made of gold and 1 kg of gold was 2,480 kroner. In other words, 1 gold crown was set to be 0.403 grams of gold. In connection with crown gold coins, silver crowns, and later banknotes were introduced in the three countries. All Scandinavian kroner were considered legal tender and free exchange rate parity at the respective central banks that were part of the SMU. An important aspect of this system was that regardless of who held silver crowns or banknotes, it was entitled to have them switched to gold at the central bank.

Even though the SMU system was standardized and the money in circulation was set to have uniform value, it still became decentralized. This meant that there was no central bank in the Union that controlled the gold flow. For example, if Norway had a trade deficit with a non-EU country (ie the value of its imports was higher than the value of the country's exports), it meant that in order to offset this difference, you had to pay in gold . Thus gold would flow out of Norway. This is where the unique self-adjusting mechanism of the gold standard came into play. With gold flowing out of Norway, the country's money supply (gold) would reduce, leading to deflation, ie. lower prices. With Norway now having lower prices for its goods (in the form of gold), other countries will then be more interested in taking over Norwegian goods,

This system worked so well that the three central banks did not even intervene in financial markets (as opposed to today) for almost four decades, and in addition prove to be extremely efficient and easy to maintain, but also helped to promote trade , and thus prosperity.
COMMENTS
NEW COMMENT