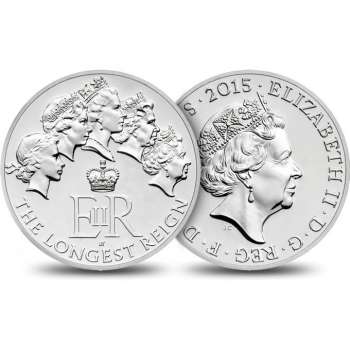 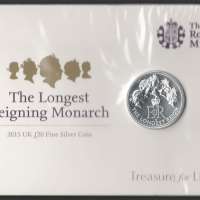 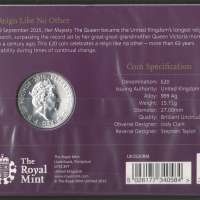 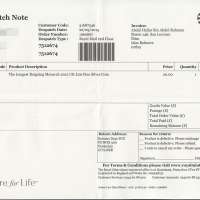 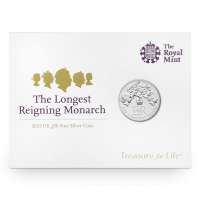 A special day is etched quietly into the history books as Her Majesty The Queen celebrates a remarkable Royal milestone, becoming our longest reigning monarch. Mark this once-in-a-lifetime occasion with The Royal Mint’s fine silver £20 coin, featuring Stephen Taylor’s stunning debut United Kingdom coin design. Combining all five definitive portraits of Her Majesty, the coin depicts The Queen maturing in the public eye; dedicating herself to the duties of her role and to her people.

The Queen has celebrated some remarkable milestones, including silver, golden and diamond Jubilees. But on 9 September 2015, she quietly eclipsed them all, becoming our longest reigning monarch, surpassing the record set by Queen Victoria more than a century ago. Society has changed immeasurably since Her Majesty’s coronation in 1953, but she remains a reassuring and constant presence in British public life – admired, loved and respected all over the world.

This fine silver £20 coin is designed to be enjoyed time and again; a memento of this once-in-a-lifetime occasion. Struck to Brilliant Uncirculated standard, a superior finish to the coins in your pocket, the reverse design features Stephen Taylor’s nostalgic yet contemporary composition. He showcases each of the five definitive portraits of Her Majesty to create a timeline effect, where we see the story unfold of a monarch maturing on the nation’s coins. Capture the moment Her Majesty, with her characteristic modesty, became our longest reigning monarch, by adding this magnificent coin to your collection.
COMMENTS
NEW COMMENT