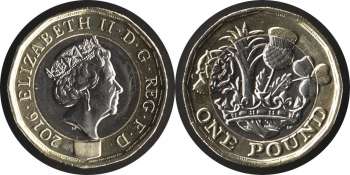 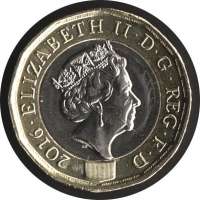 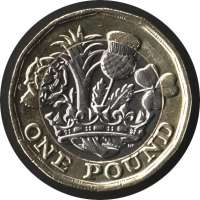 The new coin has a number of features that make it much more difficult to counterfeit.

12-sided – its distinctive shape makes it instantly recognisable, even by touch.

Latent image – it has an image like a hologram that changes from a ‘£’ symbol to the number '1' when the coin is seen from different angles.

Micro-lettering – it has very small lettering on the lower inside rim on both sides of the coin. One pound on the obverse “heads” side and the year of production on the reverse “tails” side, for example 2016 or 2017.

Reverse
A design showing the English rose, the Welsh leek, the Scottish thistle and the Northern Irish shamrock emerging from one stem within a royal coronet.
ngraver: David Pearce