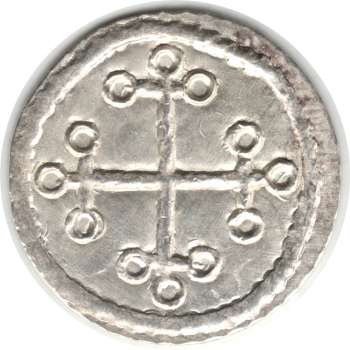 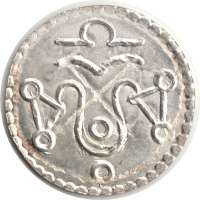 Replica of a coin, found at the excavation of Trælleborg. One side shows a strange pattern of lines, assumed to be an entirely dissolved representation of Christ Enthroned, well known from the Byzantine coins that served as the inspiration for the Trælleborg coin. On the reverse can be seen another Christian symbol - the Holy Cross.

These coins can be dated to circa 975 to 995 AD. They were certainly minted in Scandinavia, but the exact location is not known. It is presumed that these coins were issued by King Harald Bluetooth. Being the king who "made the Danes Christian", it was obvious to choose Christian symbolism on the coin.

The copy was made in pure silver by Ralf Kleis Larfred, using the same technique that archeological finds and traces of tools suggest were used in production of such coins.

Is a 1000 year old Royal Fortress, located near Slagelse. The circular fortress was constructed in the late Viking age, around AD 980. It was probably erected on the order of King Harald Bluetooth, as a military stronghold in the conflict with rebellious chieftains, in a time of great change: The Christian Church supplanted the old pagan beliefs, towns were founded and the country was united under one king.

The fortress was probably also a centre for trade and administration.

Trælleborg was part of a larger military system, consisting of the other ring fortressess of Aggersborg, Fyrkat and Nonnebakken. Possibly the fortress at Trelleborg in Scania, Sweden was also included in this system along with a number of naval fortifications and bridges across bogs at strategically important sites.

The garrison numbered a large amount of people, probably around 500. Most were young men - warriors - but the archaeological artefacts show that there also were craftsmen, women and children. The finds also show that the fortress were in active use for a very short time; the site lost its importance around 990 and was abandoned shortly after.

The site was exvacated and restored by the National Museum in the years 1934 - 1942.

Harald "Bluetooth" Gormsson (Old Norse: Haraldr blátǫnn Gormsson, Danish: Harald Blåtand Gormsen) (probably born c. 935) was a King of Denmark and Norway. He was the son of King Gorm the Old and of Thyra Dannebod. He died in 985 or 986 having ruled as King of Denmark from c. 958 and King of Norway for a few years; probably around 970. Some sources say his son Sweyn Forkbeard forcibly deposed him as King.