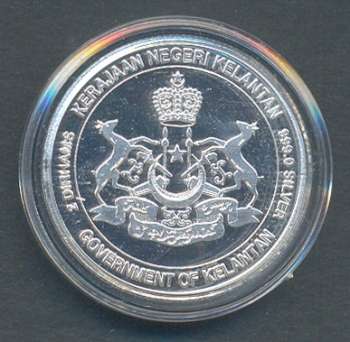 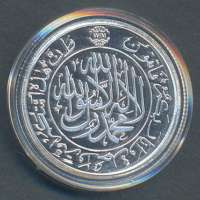 GENERAL INFORMATION
Country
Sultanate of Kelantan
Denomination
2 Dirham
Minted Date/Year
2010 CE
Coin Type
Currency Token
Punch / Orientation
↑↑ Medal
Front Legend
KERAJAAN NEGERI KELANTAN 2 DIRHAM 999.0 GOVERNMENT KELANTAN
Mint
World Islamic Mint of Abu Dhabi, United Arab Emirates
Composition
.999 Fine Silver
Coin Edge
Milled/Reeded - Vertical
Coin Shape
Round - Circular
Weight
6 g
IN COLLECTION CONDITION
Preliminary
Normal
Condition
Uncirculated
Kelantan - 2 Dirham
The Kelantanese dinar is a currency issued by the Government of the Malaysian state of Kelantan, which purportedly is in conformance with the concept of the Islamic gold dinar. The Kelantanese dinar is available in the form of coins of several denominations. These coins were first struck in 2006 by Mariwasa Kraftangan of Kuala Kangsar, Perak, a local producer of souvenirs and replicas of objects of art and culture, and launched by the state of Kelantan on 20 September 2006. The Government of Kelantan had suggested that the coins had the status of legal tender, and the state-issued dinar sold out quickly, with many buyers seeing the gold dinar as a better choice than fiat money.