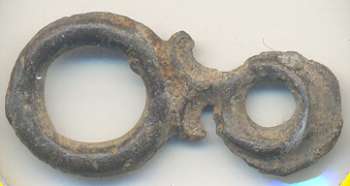 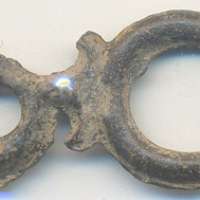 GENERAL INFORMATION
Country
Kedah
Denomination
1 cent
Coin Type
Circulation Coin
Punch / Orientation
↑↑ Medal
Head of State
Sultan Muhammad Jiwa Zainal Abidin Muazzam Shah
Composition
Tin
Coin Edge
Flat Rim (No Edge)
Coin Shape
Round - Circular
IN COLLECTION CONDITION
Preliminary
Normal
Condition
Fine
CATALOG INFORMATION
SS20D
The Encyclopaedia of the Coins of Malaysia, Singapore and Brunei 1400 - 1967
​Kedah - 2 Rings from Cockerel 'Duit Ayam'
During the reign of Sultan Muhammad Jiwa Zainal Abidin Muazzam Shah (1710 - 1773), animal money made of tin was introduced in Kedah. This form of currency was restricted to models of the fighting cock which was perched on a number of rings attached to it's base. The model was also known as 'Duit Ayam'.

In the 1750's, the currency of Kedah was also consisted of models of the fighting cock made of tin and perched on a number of rings. These tin cocks perched on five rings were the equivalent of ten cents of the Spanish Dollar. The rings on the cock could be broken off and used separately. Each ring represented a unit of currency.

From the few records avaiable, it was known that the fighting cock itself was worth five cents of the Spanish Silver Dollar which each attached ring below added a further one cent to it's value. For small purchases the metal rings were broken off and used as one cent pieces. A few pieces of this tin cockerel on rings were still in circulation as late as the 1850's when each ring was worth 10 pieces of the Singapore Merchants one Keping tokens.

In the 1670's, Thomas Bowrey published a report which gave the value of Kedah currency:

According to Logan, in 1850 the scale of values for the tin cash or tra:

By 1899, the exchange rates for Kedah, Perlis and Setul according to Temple was