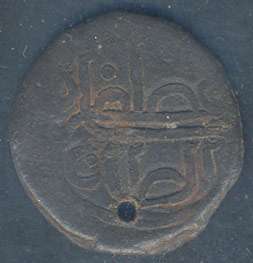 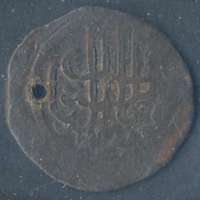 Helper of the World and of the Religion (Islam)

The coin is not exactly medal, but 45° turned. Can be seen if taken the hole as the point of angle.

The Malacca Sultanate (Malay: Kesultanan Melayu Melaka; Jawi script: كسلطانن ملايو ملاك) was a Malay sultanate centered in the modern day state of Malacca, Malaysia. Conventional historical thesis marks circa 1400 as the founding year of the sultanate by a renegade Malay Raja of Singapura, Iskandar Shah, who was also known in certain accounts as "Parameswara". At the height of the sultanate's power in the 15th century, its capital grew into one of the most important entrepots of its time, with territory covering much of the Malay Peninsula, Riau Islands and a significant portion of the east coast of Sumatra.

In 1511, the capital of Malacca fell to the Portuguese Empire, forcing the last Sultan, Mahmud Shah (r. 1488-1511), to retreat to the further reaches of his empire, where his progeny established new ruling dynasties, Johor and Perak. The legacy of the sultanate remained, with significance lies in its far-reaching political and cultural legacy, which, arguably, continues to be felt in modern times. For centuries, Malacca has been held up as an exemplar of Malay-Muslim civilization. It established systems of trade, diplomacy, and governance that persisted well into the 19th century, and introduced concepts such as daulat- a distinctly Malay notion of sovereignty - that continues to shape contemporary understanding of Malay kingship.