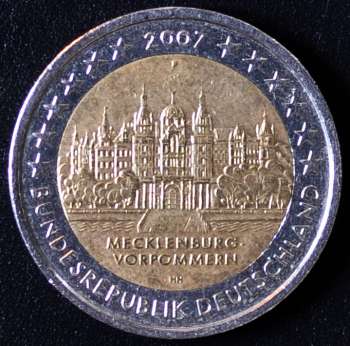 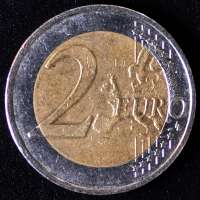 Schwerin Castle (German: Schweriner Schloss) is a castle located in the city of Schwerin, the capital of the Bundesland of Mecklenburg-Vorpommern, Germany. For centuries it was the home of the dukes and grand dukes of Mecklenburg and later Mecklenburg-Schwerin. It currently serves as the seat of the state parliament.

In the centre the Castle of Schwerin; lower in two lines: MECKLENBURG - / VORPOMMERN; along the bottom edge: BUNDESREPUBLIK DEUTSCHLAND (Federal Republic of Germany); along the top edge year of issue 2007 divides twelve five-pointed stars - symbol of the European Union.

Germany started the commemorative coin series Die 16 Bundesländer der Bundesrepublik Deutschland (The 16 States of the Federal Republic of Germany) in 2006, which will continue until 2021. The year in which the coin for a specific state is issued coincides with that state's Presidency of the Bundesrat.

This is from the type of commemorative coins that was issued by a single country. As a rule, euro countries may each issue only one €2 commemorative coin per year. Exceptionally, they are allowed to issue another, provided that it is a joint issuance and commemorates events of European-wide importance.

Heinz Hoyer (initials HH below VORPOMMERN on the obverse),