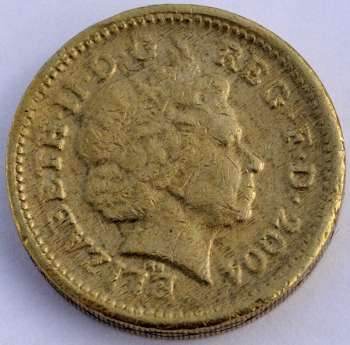 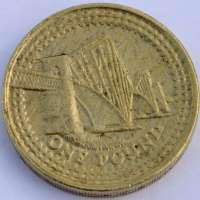 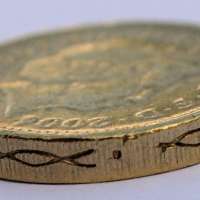 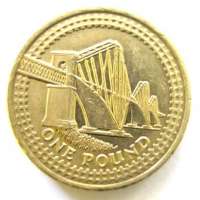 GENERAL INFORMATION
Country
United Kingdom
Denomination
1 Pound Sterling
Minted Date/Year
2004 CE
Coin Type
Contemporary Forgery
Punch / Orientation
↑↑ Medal
Front Legend
ELIZABETH • II • D • G REG • F • D • 2004
Back Legend
ONE POUND
Head of State
Queen Elizabeth II
Coin Edge
Milled/Reeded - Vertical
Coin Shape
Round - Circular
Diameter
22.5 mm
Thickness
3.15 mm
IN COLLECTION CONDITION
Preliminary
Normal
Condition
Very Fine
United Kingdom £1 2004 Forgery/Counterfeit
United Kingdom £1 2004 Forgery
I came across this coin by accident when I was visiting my friend in Brington, England. While checking the coins after we got back from shopping, I noticed a dull-looking coin and upon closer inspection, I knew instantly that I have in my possession a counterfeit coin that I had previously read about.

OBSERVATION
The die is quite weak, hence the poor quality strike on both side, making the appearance looks dull.

The coin rims look uneven.
The inscription "IRB" beneath Queen's neck is not readable.
The milled effect on the side looks uneven and the overlapping lines also look uneven and have an "extra" while the dot, was not really circular.

Abbreviation: ELIZABETH II D G REG F D
Latin: ELIZABETH II DEI GRATIA REGINA FIDEI DEFENSATRIX
English: Elizabeth II, By the Grace of God, Queen and Defender of the Faith
THE ROYAL MINT
A survey by The Royal Mind (April 2012) indicated that the £1 coins in circulation at the rate of 3.09% and has been on gradual increase up from 2.94% in its previous survey. Around 44m fakes are in circulation.
According to the same source, features of counterfeit coins to look out for are set out below.
The date and design on the reverse do not match (the reverse design is changed each year).
The lettering or inscription on the edge of the coin does not correspond to the right year.
The milled edge is poorly defined and the lettering is uneven in depth, spacing or is poorly formed. The obverse and reverse designs are not as sharp or well defined.
Where the coin should have been in circulation for some time, the colouring appears more shiny and golden and the coin shows no sign of age.
The colour of the coin does not match genuine coins.
The orientation of the obverse and reverse designs is not in line.
COMMENTS
NEW COMMENT
#199 Tuesday 21 August 2018 04:28:20 PM
Kavita Kumari
India
I have 1 also. its look like it. Give me some information related to it.