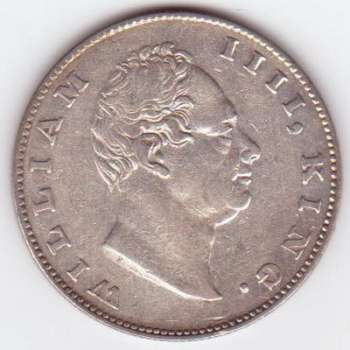 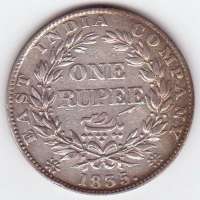 Head of the King facing right. R.S. incuse on the truncation of the neck. Surrounded by the divided legend: WILLIAM IIII, KING. All within a raised, toothed border.

Reverse
The value in English and Persian: ONE RUPEE in Persian script (Yek Rupiya; translation: One Rupee) All within a wreath of laurel. Around this the legend: EAST INDIA COMPANY 1835. All within a raised, toothed rim.
Rupees were authorised by Act XVII, dated 17th August 1835, and details were announced by proclamation dated 2nd September 1835. With the accession of Queen Victoria in 1837, a new act, XXXI, 1837, suspended those parts of Act XVII, 1835 that referred to the issue of the coins with the effigy of the reigning monarch. Rupees dated 1835 were issued from September 1835 until November 1840, when a proclamation announced the restoration of Act XVII.

Legislation
A.D. 1835 Act XVII
PASSED by the Honourable the Governor-General of India in Council on 17th August 1845
I. BE it enacted, that from the 1st day of September, 1835, the undermentioned silver coins only shall be coined at the mints within the territories of the East-India Company: a rupee, to be denominated the Company's rupee; a half-rupee , a quarter-rupee and a double rupee; and the weight of the said rupee shall be 180 grains troy and the standard shall be as followes: 11/12 or 165 grains pure silver 1/12 or 15 grains of alloy.
II And be it enacted, that these coins shall bear on the obverse the head and name of the reigning sovereign of the United Kingdom of Great Britain and Ireland, and on the reverse the designation of the coin in English and Persian and the words "East-India Company" in English, with such enbellishments as shall from time to time be ordered by the Governor-General in Council.
III. And be it enacted, that the Company's rupee, half-rupee and double rupee, shall be legal tender in satisfaction of all engagements provided the coin shall not have lost more than two per cent in weight, and provided it shall not have been clipped, or filed, or have been defaced otherwise than by use.
IV. And be it enacted that the said rupee shall be received as equivalent to the Bombay, Madras, Furruckabad and Sonat rupees, and to fifteen-sixteenths of the Calcutta sicca rupee, and the half and double rupee respectively ....
V. And be it enacted, that the Company's quarter-rupee shall be a legel tender only in payment of the fraction of a rupee.
etc.
A.D. 1837. Act XXXI
PASSED by the Honourable President of the Council of India in Council on 20th November 1837.
I. It is hereby enacted, that so much of Act. No. XVII. of 1835, as directs that certain coins issued from mints within the territories of the East-India Company, shall bear on the obverse the head of the reigning sovereign of the United Kingdom of Great Britiain and Ireland, shall be suspended, till the Governor-General of India in Council shall, by an Order of Council, declare those parts of the said Act to be again in force.
II. And it is hereby enacted, that till the said Governor-General in Council shall make such an Order in Council as in aforesaid, the said coins shall bear on their obverses the head of his late Majesty, William the Fourth.
Mint & Issue
They were only issued from the mints of Bombay and Calcutta, although there is an official return from the Madras mint claiming a mintage of 1.2 million rupees bearing the date 1835. Designs for both the obverse and reverse were prepared at Calcutta. The initials on the truncation of the neck refer to the mint masters at Calcutta RS = Robert Saunders (7.4.1826 to 4.1.1836), and F = William Forbes (5.1.1836 to 23.1.1855).
Coins bearing the initials F and RS can definitely be attributed to Calcutta. Pridmore states that the ratio of 'F' to 'plain' rupees is approximately 2:1 and, since the ratio of actual coins struck also occurs at this ratio, it is fair to assume that the 'plain' bust belongs to Bombay. At this time, coins minted in Britain would normally have been marked W. W. (or variety) for William Wyon.
The major die varieties are fairly easy to identify. However, there have been a number of observations recording very small differences, particularly referring to the mid-veins (or ribs) on various leaves in the reverse wreath (e.g. Paul Withers, Randy Weir, personal communication). Only the major varieties have been recorded within the catalogue.
East India Company
The East India Company (also the East India Trading Company, English East India Company, and then the British East India Company) was an early English joint-stock company that was formed initially for pursuing trade with the East Indies, but that ended up trading mainly with the Indian subcontinent and China. The oldest among several similarly formed European East India Companies, the Company was granted an English Royal Charter, under the name Governor and Company of Merchants of London Trading into the East Indies, by Elizabeth I on 31 December 1600. It ceased to trade in 1857.
Lt.-Col. William Nairn Forbes R.E., Master of the Calcutta Mint from the 5th January 1836 - 23rd January 1855
Initials: F incuse (?)