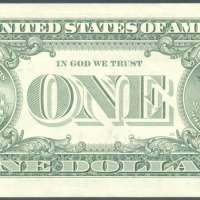 The inclusion of the motto, "In God We Trust," on all currency was required by law in 1955, and first appeared on paper money in 1957.

An individual dollar bill is also less formally known as a one, a single, a buck, a bone, and a bill.

The Federal Reserve says the average life of a $1 bill in circulation is 4.8 years before it is replaced because of wear. Approximately 42 percent of all U.S. currency produced in 2009 were one-dollar bills.

1
ONE
THE UNITED STATES OF AMERICA

IN GOD WE TRUST

Taken from the Latin words annuo (third-person singular present or perfect annuit), "to nod" or "to approve", and coeptum (plural coepta), "commencement, undertaking", it is literally translated, "He approves (has approved) of the undertakings".

The phrase Novus ordo seclorum (Latin for "New Order of the Ages") appears on the reverse of the Great Seal of the United States, first designed in 1782 and printed on the back of the United States one-dollar bill since 1935. The phrase also appears on the coat of arms of the Yale School of Management, Yale University's business school. The phrase is also mistranslated as "New World Order" by many people who believe in a conspiracy behind the design; however, it does directly translate to "New Order of the Ages".