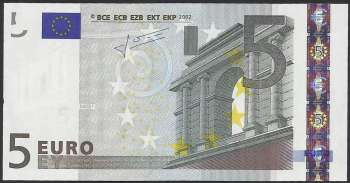 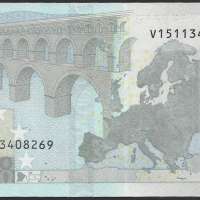 The five euro note (€5) is the lowest value euro banknote and has been used since the introduction of the euro (in its cash form) in 2002. The note is used in the 22 countries which have it as their sole currency (with 20 legally adopting it); with a population of about 332 million.

It is the smallest note measuring 120 x 62mm. and has a grey colour scheme. The five euro banknotes depict bridges and arches/doorways in Classical architecture (up to the fifth century).