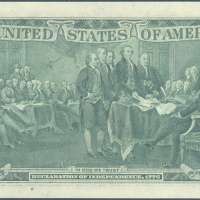 In April, 1976, the Treasury Department reintroduced the $2 bill as a cost-saving measure. Series 1976 $2 bills were redesigned and issued as a Federal Reserve Note. The obverse remains basically unchanged since 1929 and features the same portrait of Jefferson. A green treasury seal and serial numbers replace the red used on the previous United States Notes. Since the reissue of the bill coincided with the United States Bicentennial, it was decided to use a bicentennial themed design on the reverse. An engraved rendition of John Trumbull's The Declaration of Independence replaced Monticello on the reverse. First day issues of the new $2 bills could be taken to a post office and stamped with the date "APR 13 1976". In all, 590,720,000 notes from Series 1976 were printed.

2
TWO
THE UNITED STATES OF AMERICA
TWO DOLLARS
IN GOD WE TRUST
DECLARATION OF INDEPENDENCE, 1776