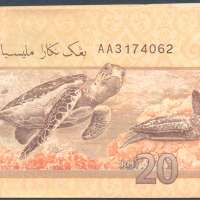 This is the first group of RM20 being circulated into the public domain bearing serial number starts with AA.

The reverse depicted two birds from the group of Hawksbill and Leatherback turtle whereas the older second series depicted Bank Negara Malaysia headquarters in Kuala Lumpur.