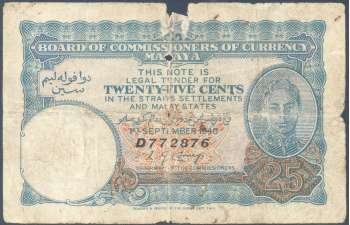 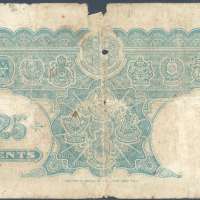 Because of the outbreak of war in Europe, there was a currency shortage due to silver coins hoarding as the intrinsic value of the metal was greater than the face value of the coins. In needs to meet for small change, the Survey Department printed 10 and 25 cents in Kuala Lumpur for circulation.

The condition of the banknote is somewhat poor. Holes in the middle, and top-middle. Tear on top-middle

On the reverse, the sign of aging due to improper storage. It was folded into 8 smaller sections.

It is considered rather scarce. Known prefix is from A to F.