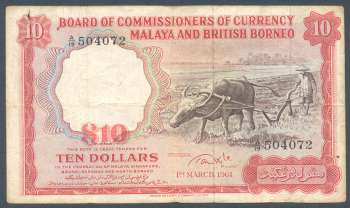 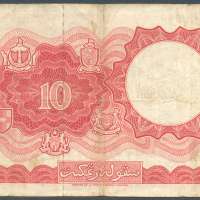 This banknote is also known as Buffalo Dollar (Dollar Kerbau or Ringgit Kerbau). It was the first $10 issued after the independence of Federation of Malaya.

It was dated 1st March 1961 and signed by Tun Tan Siew Sin, Financial Chairman of Bank Negara Malaya (now known as Bank Negara Malaysia). This banknote was issued by Board of Commisioners of Currency Malaya and British Borneo.

It shows tiger head as its watermark and depicted a farmer ploughing a paddy/rice field with a buffalo, a common scene during that time in Malaya.

Some collectors consider this to be quite rare item, but of late, many has flooded and exchanged among collectors. The price can be quite expensive as well.

This is of common variety: red,black & brown (Small serial number "A")

Just a fine quality considering that there are two holes (caused by stapler) on top-right, small tear and rusty stain.

The obverse contains script in old Jawi, which in modern Jawi will be as follows:

which original text in English was:

This Note Is Legal Tender for Ten Dollars in the Federation of Malaya, Singapore, Brunei, Sarawak & North Borneo.