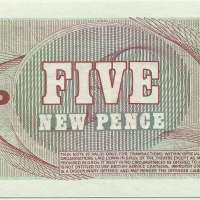 At the end of the war in Europe in 1944, France, Britain, United States and Russia agreed at the Potsdam Conference to split Germany into four occupation zones. The British area was occupied by the 21st Army Group that was collectively known as the British Army of the Rhine (BAOR).

The Allies' job was challenging. They had to disband and disarm the German fighting machine, reassemble the country's basic infrastructure, and cope with population on the brink of starvation. To this end the BAOR operated as a country within a country, requiring a monetary system that functioned to serve the needs of the occupying forces. However, a problem soon emerged; goods intended for the troops were being sold to a thriving black market among the local population at highly inflated prices. Millions of pounds sterling were being lost by the taxpayers of Britain. A series of stopgap measures slowed, but did not stop the problem. It was decided in March of 1946 that a special military voucher system was needed.

After a remarkably brief period of preparation, the first series of 52,400,000 British Armed Forces Special Vouchers (BAFSV), valued at just over 10 million pounds sterling were printed by Thomas De La Rue and officially issued on August 1, 1946. In due course the ingenuity of the local population and the troops largely circumvented the intention of the first issue BAFSV's to slow black market activities. By mid 1947 it was decided, under a cloak of secrecy, to prepare a new issue to replace the first, then immediately demonetize the first to limit the conversion of illicitly-gained first series vouchers. This scheme was carried out on January 6, 1948, when the second issue was released. The third series was printed in 1948 by J. Waddington Ltd, but were not issued until 1956 for use during the Suez Canal Crisis. This situation was quickly resolved over a two-month period and those notes withdrawn.

The fourth issue was originally discussed in 1952 but were not ordered until the heating up of the cold war and the lack of a backup series prompted the British War Office in 1962 to design not only a fourth, but also a fifth series. A new printer, Bradbury Wilkinson, was chosen for the job of producing these next two series: The fourth series was printed, but never issued, and according to all records, the fifth series was never printed. The sixth series, together with the 1 and 5 pound notes of the second series, were used in Berlin up to December 31, 1979, when they were finally withdrawn. On the 14th of February 1991, The Ministry of Defense auctioned off their stock of 17 million uncirculated vouchers from the 2nd, 3rd, 4th and 6th series to a consortium of dealers.

British Armed Forces Special Vouchers were issued to troops of the British Army of the Rhine in post war Germany and elsewhere from 1948 until the end of 1979 for use as currency. Their intended purpose was to stem the tide of illegal black market sales of government property to the local population in the occupied areas. The 1 and 5 pound notes, marked with the printer Thomas De La Rue, are from the second issue, released in 1948 and 1958 respectively. The 5, 10 and 50 pence notes are from the 6th issue, printed by Bradbury and Wilkinson in 1972, released in conjunction with the switch to decimalization.

"For Use Only As Detailed On The Reverse"

This note is valid only for transactions within official canteens and organisations laid down in GROs of the theatre except as maybe expressly provided in GROs. It must in no circumstances be offered to any person who is not entitled to use British Service canteens. Improper use of this note is a disciplinary offence and may render the offender liable to penalties.