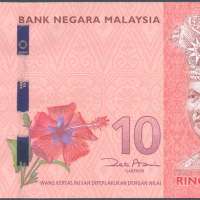 The design of the new notes was announced on December 21, 2011, and the notes are expected to be put into circulation in the second half of 2012. The new series banknotes are legal tender and will co-circulate with the existing series. The existing series will be gradually phased out. All banknote denominations in the new series will retain the portrait of the first Seri Paduka Baginda Yang di-Pertuan Agong, Tuanku Abdul Rahman ibni Tuanku Muhammad. The banknotes are supplied by Crane AB of Sweden, Giesecke & Devrient GmbH of Germany, Oberthur Technologies of France and Orell Fussli of Switzerland

A replacement banknote is a banknote that is printed to replace a faulty one and is used as a control mechanism for governments or monetary authorities to know the exact number of banknotes being printed. As quality control finds defective notes in the printing process after the serial number has been overprinted, they are taken out with their serial number written down before they are destroted and replaced with another banknote printed specifically for this purpose, so that the amount of banknote being printed stays the same in each production batch. This saves time and money compared to re-printing exactly the same serial number that was used before. Often these replacement notes are marked by special serial numbers or other markings.

RM 10 features Malaysia's lush tropical jungle, which is one of the world's oldest living rainforest, is home to a spectacular variety of flowering plants. Most iconic amongst them is the Rafflesia, the world's largest flower.

The Rafflesia azlanii species featured on the new RM10 banknote is indigenous to Peninsular Malaysia and was first discovered in the Royal Belum Forest Reserve of the state of Perak in 2003.

Why is Bank Negara Malaysia introducing the fourth series of Malaysian banknotes?

The introduction of the new series of banknotes is to incorporate modern security features and latest advancements in technology to enhance the usage and security. The new series will gradually replace the existing series that has been in circulation for more than 10 years.

What are the security features incorporated in the fourth series of Malaysian banknotes?