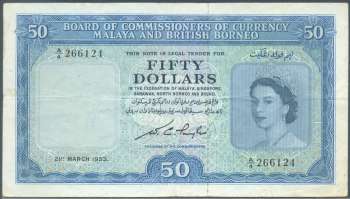 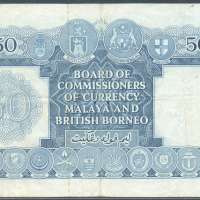 THIS NOTE IS LEGAL TENDER FOR
FIFTY DOLLARS
IN THE FEDERATION OF MALAYA, SINGAPORE,
SARAWAK, NORTH BORNEO AND BRUNEI

The jawi script was in old-spelling. The modern spelling is ليما ڤولوه ريڠڬيت
= Lima Puluh Ringgit (In Malay)
= Fifty Dollars (In English)