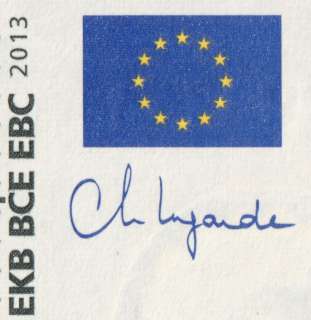 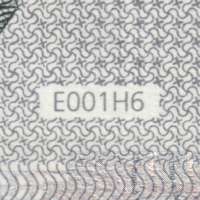 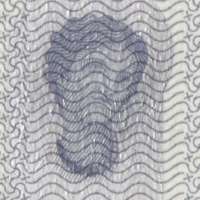 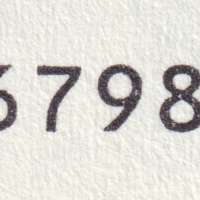 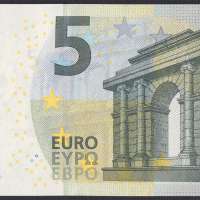 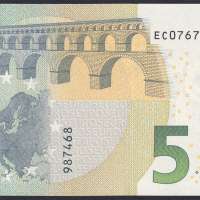 GENERAL INFORMATION
Denomination
5 Euro
Issued Date/Year
2013 CE - Common Era
Note Type
Paper - Circulation
Front Description
© BCE ECB ЕЦБ EZB EKP EKT EKB BĊE EBC 2013
5 EURO EYPΩ EBPO
Back Description
Governor
Christine Lagarde (ECB President)
Note Printer
Oberthur Fiduciaire, France
Dimension
120 × 62 mm
IN COLLECTION CONDITION
Preliminary
Normal
Condition
Almost Uncirculated
5 Euro : Europa Series (2013) Printed by Oberthur Fiduciaire
In the new series, there are two codes, like in the first series. They are the printer code in the top right-hand corner and the serial number. Part of the serial number is horizontal and part of it is vertical. The serial number begins with a letter indicating the printer, which is broadly similar to the first series (Z for Belgium, Y for Greece, etc.). The second letter of the new serial numbers is part of the serial number itself and has no further significance.

However, as the code indicates the printer, rather than the issuing NCB, certain letters have been reassigned from NCBs which do not maintain their own printing facilities. In the first series, H denoted Slovenia. As there is no Slovene printer of euro banknotes, H represents De La Rue (Loughton) in the second series. Several of the printers which replaced what were NCB codes maintain their printing code from the first series (De La Rue, mentioned, and Bundesdruckerei, which replaced Luxembourgas R, its previous printing code).

The printer code is somewhat hidden. It is always printed on the front of the note, the same side where the year is found and not where the serial number is. For 5 €, it is in the far left of the colored area, 1cm above the O in EURO.

The printer code is a small sequence of letters and numbers found on the front of a note. The first letter of the printer code indicates which printing facility printed the note. There are one or two of these per European country and they usually specialize per serial/value.
The next three digits identify the plate which was used for printing this bill. The last letter and digit mark the spot of this individual banknote on the printing sheet.