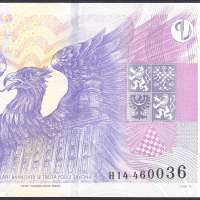 The koruna (sign: Kč; code: CZK) is the currency of the Czech Republic since 1993, and in English it is sometimes referred to as Czech crown or Czech krone. The koruna is one of European Union's 11 currencies, and the Czech Republic is legally bound to adopt the euro currency in the future. The official name in Czech is koruna česká.

OBVERSE : František Palacký, uprooted tree.
REVERSE : Eagle spread its wings over the Archbishop's Castle in Kroměříž, where a constitution preparing parliament of Austrian Empire was held in 1848.