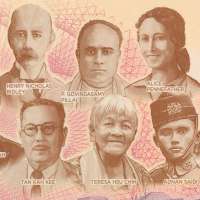 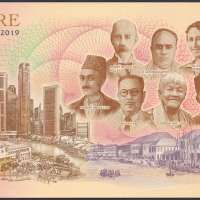 The note, issued by the Monetary Authority of Singapore (MAS), depicts Singapore’s journey to nationhood and pays tribute to forebears who laid the foundations for modern Singapore. This $20 polymer banknote commemorates 200 years since the landing of Sir Stamford Raffles on the shores of Singapore in 1819.

On 10 June 2019, the Monetary Authority of Singapore (MAS) issued a single commemorative note as part of the Singapore Bicentennial celebrations. Instead of a $200 note, the MAS opted for a $20 denomination in order to make it more affordable for Singaporeans to own a piece of history.

The front of the commemorative note features a portrait of Mr Yusof Ishak, Singapore’s first president, alongside the former Supreme Court and City Hall, which are now the National Gallery Singapore.

The back of the note showcases eight pioneers who made significant contributions to nation building in areas ranging from education, culture and community service to sports and defending Singapore, MAS said. Each note comes with a specially designed folder. It also shows the Singapore River, flowing from the past to the present. The Singapore River helped Singapore transform herself into a trading port in the early days, and eventually into a thriving financial centre for the region.

Two million pieces of the commemorative note will be available for public exchange at face value at branches of nine major banks from Jun 10:

The Monetary Authority of Singapore (MAS) issued additional two million Singapore bicentennial S$20 notes to meet "strong public interest", it announced on Friday (Jun 14 2019) and xpected to be available around October to November.

The note was designed by local artist Eng Siak Loy, together with his son Weng Ziyan.