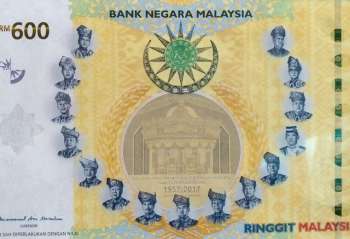 These notes are celebrating the 60th year of the signing of the Federation of Malaya Independence Agreement in 1957. The keyword is Malaya and therefore it has nothing to do with the two other states: Sabah and Sarawak which only joined and formed Malaysia in 1963. Modern Malaysia had its origins in 1957, when the more-populous western part of it became independent from the United Kingdom as the Federation of Malaya. The eastern portion joined in 1963, and the name Malaysia was adopted.

The commemorative banknotes honour the Council (later called Conference) of Rulers' contribution towards the realisation of the Nation's independence on 31 August 1957. The Agreement dated 5 August 1957 proclaiming the Yang di-Pertuan Agong as the Supreme Head of the Federation was signed by the Malay Council of Rulers from Johor, Kedah, Kelantan, Negeri Sembilan, Pahang, Perak, Perlis, Selangor and Terengganu with Sir Donald MacGillivray, the High Commissioner of the Federation of Malaya who represented Queen Elizabeth II. The Agreement became a historical constitutional evidence for the independence of the Federation of Malaya.

Malaysia demonetised the two highest denominations of 500 and 1000 Ringgit on 1 July 1999 following the Asian Financial crises (AFC). AFC was started in July 1997, first in Thailand and later spread to other countries like Malaysia, the Philippines, Indonesia, Singapore and even as far north as South Korea. The AFC weakened the value of the currencies of all these nations affected and in order to control the outflow of capital that may further impacted the Ringgit value, the government demonetised the two highest notes and at the same time making the Ringgit currency not negotiable outside its border. As this 600 Ringgit is a legal tender banknote, this is the first time since 1999 that a banknote issued with the face value higher that 100 Ringgit as legal tender

The two notes are printed on Durasafe Hybrid materials, a composite of paper and polymer substrate, speculated to have been printed by Giesecke Devrient. Both notes are sold with a premium and were made available to the public in 3 varieties, with order arrangement which was opened only through website between 29 December 2017 until 19 January 2018. A small quantity of these notes with special or popular serial numbers was reserved for public auctioning on 10 March 2018.

Based on the above, it would be reasonable to say that a minimum of 78,000 notes of RM60 printed.

All notes are printed with special letter prefix of MRR followed by 7 digits. It is believed that MRR prefix stands for Majlis Raja-Raja or Council of Rulers.

There was a public purchase limit per person as the BNM claimed that it is meant to provide a fair opportunity for the public to buy these limited edition banknotes.

A set of this issue was presented to the Raja of Perlis by Bank Negara Malaysia Governor Tan Sri Muhammad Ibrahim on 22 January 2018.

This is the first time in Malaysia banknotes history since 1967 that the portraits of all Agong (past and present) are printed on a single banknote. Since 1967, all banknotes have been just printed with the portrait of the first Agong, Tuanku Abdul Rahman of Negri Sembilan.

Symbolising Malaysia as a constitutional monarchy, placed in the middle is the majestic royal throne encircled by the portraits of 15 Yang di-Pertuan Agong who have reigned, in the past 60 years from 1957 until 2017. The design is inspired by the crescent and a 14-pointed federal star which are featured on the royal headgear.

The royal throne surrounded by a victory wheat wreath, portraits of 15 Yang di-Pertuan Agong positioned in a horse shoe shape, who have reigned since independence (1957) until present day, starting from top left to right: The term for the rotating Agong is fixed for 5 years. The note is also printed with the year dates of 1957-2017.

The back of the note shows portraits of the all nine Rulers (Sultans/Raja) of the original signatories of the independence agreement. The nine Rulers who signed the agreement were (from left to right and top to bottom): The reverse design features the portraits of the nine rulers signing the Federation of Malaya Independence Agreement on 5 August 1957. These banknotes are decorated with prominent independence and post-independence figures and features.  On the right-hand side of the banknote is the triumphant silhouette of Tunku Abdul Rahman Putra Al-Haj, the architect of Malayan independence and the first Prime Minister of Malaysia.

Imprinted on the background are four significant landmarks: the National Palace, Perdana Putra, the Parliament building (August House) and the Palace of Justice. These reflect the four pillars of the nation: the institution of the Monarchy, the Executive, the Legislature and the Judiciary respectively.

The signing of the agreement was based on seniority of the each Ruler and despite the Sultan of Johor was the most senior Ruler then (62-year as Sultan), his State signed last as he did not attended the signing ceremony and instead represented by his son, the Crown Prince. At the time of the signing, the Sultan of Johor was residing in London, England. Also been the most senior Ruler, it was also reported that he rejected the offer to head the first Agong of the newly independent nation citing old age (84 years old in 1957) and at that time, he was more interested in enjoying retirement in England. He died two years after independence. Many historians would agreed that this was the right choice for him not to accept the first Agong role, as he was very pro-British then and at one time openly expressed his view against seeking full independence from the British rule in Malaya. If he had accepted this position, his portrait would have appeared on all Malaysia banknotes issued since 1967.

The next most senior Ruler was the Sultan of Pahang but he was unsuccessful in securing the minimum votes of 5 to install him as the first Agong of Malaya. It appeared that this Sultan of Pahang was not a popular person among the other Rulers. Beside missing the first opportunity, he was not elected by his peers for the same post when it became vacant in 1960 (twice), 1965 and 1970. He died in 1974. The first Agong position went to the Ruler of Negeri Sembilan, Tuanku Abdul Rahman.

The Governor's signature is of Muhammad bin Ibrahim, who was appointed to the role since 1 May 2016.

Philippines 100,000 Peso with the size of 356 × 216mm was issued by the Central Bank of Manila on 22 May 1998. The banknotes were printed by Giesecke Devrient of Munich, Germany. Only 1,000 pieces were issued to commemorate The Centennial of Philippine Independence in 1998. The banknote was offered to collectors by the Central Bank in 1998, who could purchase one of the limited-edition notes for a premium of 180,000 pesos.

It is a celebrated event and also for being unique banknotes, therefore bragging rights are a given in this situation.