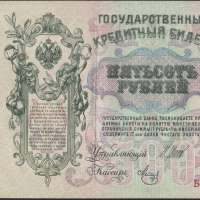 REVERSE: Effigy of Czar Peter I, The Great is in dressed in armor, ready for battle.. Seated allegoric woman symbolising the Mother Russia.

WATERMARK: Effigy of Czar Peter I, The Great.

The 500 ruble, also known as petya, issue of 1912 is one of the most spectacular banknotes of the imperial period due to both its sharp-looking design and sheer size.  This note is massive, and among the largest banknotes ever issued by any nation.  It measures 275mm by 127mm, and is truly a piece of artwork.  The front features the imperial coat of arms in several places, the denomination, and a watermark of Czar Peter The Great (r. 1682 - 1725) on the left-hand side.

According to the most popular version, the word “rouble” is derived from the Russian verb руби́ть (rubit’), meaning to chop.

The ruble has been the Russian unit of currency for about 500 years. From 1710, the ruble was divided into 100 kopeks.

The amount of precious metal in a ruble varied over time. In a 1704 currency reform, Peter I standardized the ruble to 28 grams of silver. While ruble coins were silver, there were higher denominations minted of gold and platinum. By the end of the 18th century, the ruble was set to 4 zolotnik 21 dolya (almost exactly equal to 18 grams) of pure silver or 27 dolya (almost exactly equal to 1.2 grams) of pure gold, with a ratio of 15:1 for the values of the two metals. In 1828, platinum coins were introduced with 1 ruble equal to 77⅔ dolya (3.451 grams).

With the outbreak of the First World War, the gold standard peg was dropped and the ruble fell in value, suffering from hyperinflation in the early 1920s.

All notes bearing the signature of Shipov would have been issued between 1914 and 1917 even though the years on the notes show 1910 and 1912. 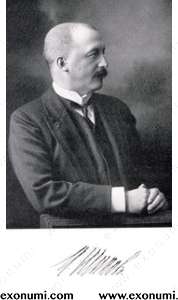