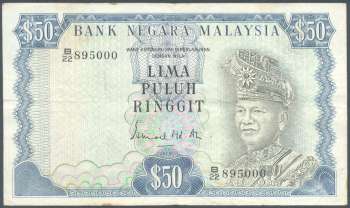 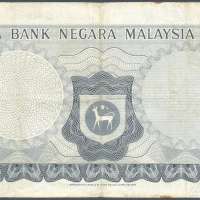 Bank Negara Malaysia first issued Malaysian dollar banknotes on 6 June 1967 in $1, $5, $10, $50 and $100 denominations. The $1000 denomination was first issued on 2 September 1968. The first Malaysian banknotes carried the image of Tuanku Abdul Rahman, the first Yang di-Pertuan Agong of Malaysia and bore the signature of Tun Ismail bin Mohamed Ali, the first Malaysian Governor of Bank Negara Malaysia. On 16 August 1972, Bank Negara Malaysia adopted official new spelling system of the national language, Bahasa Malaysia, into the printing of its currency notes while retaining the designs. The banknotes with new spellings are circulated alongside the old banknotes.

Second issues fixed a number of spelling due to Malay standardization. Fixed spellings are:

He was second Governor of Bank Negara Malaysia, he was seen driving up to the banking world is emerging with a strong concept and respected in the world. He became a member of Malaysia 's most prominent banks, the governor of the Central Bank from June 1962 to July 1980, a new record as the governor of the central bank 's longest-serving in Asia.

Main colour is blue and was introduced in 1981.